Today we reviewed the second "Figure Subscription Service" release from the GI Joe Collectors' Club, Jinx. And now we'd like to talk about her package art.

Here, as released by the GIJCC on December 1, 2012, is the full card art for Kim Arashikage: 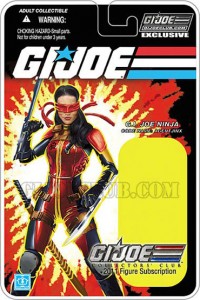 Now, obviously the final product doesn't have all the Club logos running through the center of it, but that's how they sent out the art to the press. Anyway, this is a rather nice image - well composed, nice shadows and highlights, makes her look very cool, all that. And amusingly, the headshot on the filecard is slightly different, showing her without her blindfold: 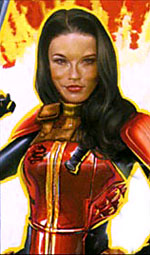 Frankly, Kim's artwork is substantially better than the art on the rest of the FSS cards. And it turns out there's a reason for that.

Take a look at this: 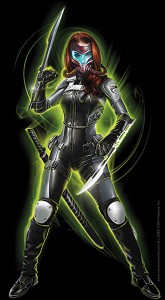 That's the Hasbro-commissioned artwork for (the eventually cancelled) City Strike Scarlett - the same figure who lent her body and accessories to become Jinx. It was done by Mike Thompson, the same fellow who just won Mattel a ToY Award for his paintings on the DC Signature Collection boxes. We know it was done by him because he posted a detailed step-by-step process of its creation on his website back in 2011.

So clearly someone got hold of his art and repainted it to be Jinx instead of Scarlett - they even kept the half-smirk he painted on her face! It means we get a beautiful piece of art on this card, but it was done without Mike's knowledge or input. Sure, Hasbro had already paid him for the work, so they owned it and could thus do with it as they saw fit, but you have to think it would have been better to get the original artist to make those changes. Or at least mentioned it to him at some point.

Or better yet, they could have released the damn City Strike Scarlett at some point.