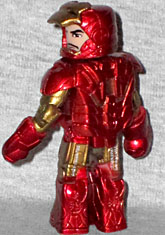 This mini-review is going to be minier than usual. And it also demonstrates why none of us ever got around to reviewing these properly: this figure is identical to the one in the Battle Tactics box set, and also mostly the same as the Mark IV; same sculpted legs, same gloves, same two helmets, same hair, same human hands. This one just has a triangle chest beam - important if you're collecting Iron Men, but it doesn't give us a lot to talk about (especially not on the fourth go-round). So instead, here's a photo of his back. That's something new.

Created using a combination of advanced Stark and Hammer 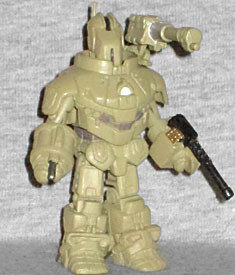 technology, the nearly unstoppable Ground Assault Drones have been augmented with enough devastating weaponry to overthrow a small nation.

The appeal of this set is clearly the Ground Assault Drone. Like the Sea & Tactical drones, it was available in the counter dump, but that means nothing: this set was at TRU. Most of the sculpted pieces - the head, the chest cap, the waist piece - are the same as on the other drones, but the feet have extra pistons on them (but not the stability flaps). There's a grenade launcher on the right arm, a machine gun on the left, and a big honkin' cannon that mounts behind the shoulder. With the tan paint apps, there's no mistaking what drone this is meant to be.

Obviously the Iron Man in this set isn't terribly inspiring, but it was nice to get the Army Hammer Drone without having to find a barely existant single-pack.