That time that "Yo Adrian" almost met "Yo Joe!"

As mentioned in today's review of Big Boa, Hasbro almost made Rocky Balboa the second "real life" character to join the GI Joe team, but the deal fell through when Coleco got Stallone's likeness for their Rambo toyline. And you may have already known all that, but did you know that the character got far enough into production that Larry Hama had written a filecard for him?

How does a well known boxing champion serve out his reserve time? He can take the easy route: be a show-piece for Special Services, 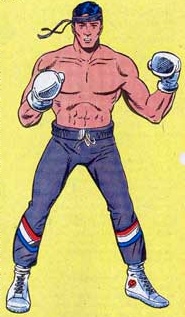 giving exhibition bouts and racking up brownie points for officer with no combat ribbons and shiny trouser buttons - or: he can take a secret posting to train the GI Joe team in the finer points of the sweet science of pugilism. The assignment to the Joe Team would be strictly under the counter. No special pay, no extra priviledges [sic] and no publicity. All he would get would be the satisfaction of doing something for his country.

"He's one of the best there is with his fists and nobody can touch him with pugil-sticks, but that's not the reason I want him training the Joes. Anybody can teach technique. I want the Joes to see what it is to take a beating and come back fighting: to stand up and take everything the other guy's got to give - and give back a full measure. That's worth more than a tip on how to perfect your right hook."

Yep, that's the usual Hama flair for making a minor amount of information seem deeply important. Using the GI Joe Filecard Maker, here's what the final product might have looked like: 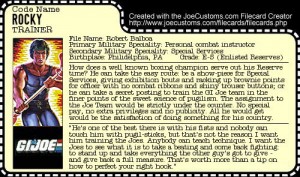 Thanks to Joepedia for the info and images...

This entry was posted in addendums and tagged GI Joe, Rocky. Bookmark the permalink.