No matter how much you may hate Skids and Mudflap, there's one toy of them that's undeniably cool: the ice cream truck. It was silly, it was unexpected, it was fun... the only thing missing? Some key paint apps.

The vehicle seen in the film was a rusty old bucket, 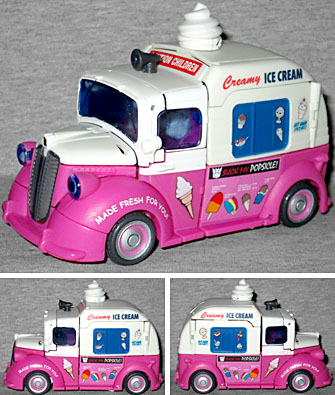 covered in all the labels and signs you'd normally expect to see on an ice cream truck, but while the toy had some sculpted rust, its labels were lacking. Naturally, Reprolabels was there to pick up the slack. Reprolabels kit M22 costs $8, which is almost as much as this toy cost when it came out. For that price you get 27 individual stickers, though not all of them are intended for Skidflap - there are a few optional ones that you can give to any other TF you feel like.

So, what do you get for your eight bucks? Basically, everything that was seen (briefly) in ths film. A red sign that reads "CAUTION CHILDREN" goes on the roof. A silver Autobot symbol peeks out of the hood ornament. The famous "(Decepticon symbol) suck my popsicle!" sticker runs beneath the windows on each side, plus prices 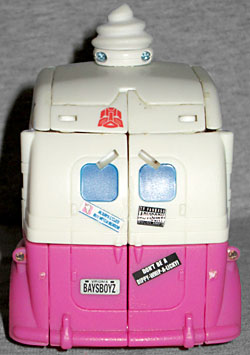 for the various frozen treats the truck sells - the Plasma Rocket Pop, Flaresicles, the Chocolate Ass Whooping and the Fudge Bomb. The large ice cream cone logos that used to be on the side panels and are now covered get moved to the front doors. The sales windows have different pictures of treats on each side, and behind those are yet another frozen delight, and a slogan promising "Icy Cold Drinks." The back end has a license plate (actually, your choice of three Virginia license plates - I went for "BAYSBOYZ" over "2COOL4U" and "DBLTRBL") and three bumper stickers applied haphazardly: Always Licked But Never Beaten; TF Fanbase Advisory Explicit Robots; and Don't Be A Dippy-Whip-A-Licky. Whatever that means. It's apparently based on a real ice cream truck bumper sticker. Oh, and finally, there are two tiny tail lights.

There was eventually a variation of this truck released 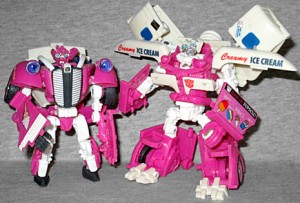 that had "rusty" paint apps, but it was only in an exclusive multi-pack, so I never got it (I considered buying it, swapping the trucks, and returning it, but then I remembered I'm not a total asshat). Still, how hard can it be to brush some brown paint on the rust spots myself? It was the ice cream signs that were too difficult to reproduce, so this set is a great addition to an already good toy. The stickers are all applied to the truck, so there isn't any massive change to the robots, other than a few of the stickers being visible in some poses.