We're now up to 16 BotBots factions, thanks to the five introduced in Series 3, but that doesn't mean the originals need to be swept off the stage to be forgotten. The Jock Squad still live in the sporting goods store on Level 2 of the mall, and Arctic Guzzlerush is laying on the ground out front. 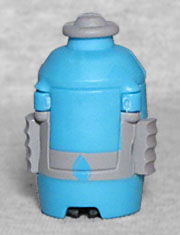 "Gatorade," of course, gets its name from the fact that it was developed at the University of Florida to benefit their sports teams, The Gators - thus the name. It's a shame it happened there and not at Florida State, because then they could have named it "Seminole Fluid." [Remind me again why we don't fire you? --ed.] This little blue bottle has grey grips on the sides and a grey spout on top, and so ends up looking more like a reusable sports bottle than a disposable one, though the name "Arctic Guzzlerush" absolutely sounds like one of those Gatorade flavors that normal people would just call "light blue." There's a raindrop logo on the bottle that is presumably the Guzzlerush company's logo?

BotBots are, by design, super easy to convert: they're meant to be fun and easy to play with, not complex feats of engineering. For this one, you pull the arms out to the sides, fold down the legs, and open the flaps over the face.

When the Jock Squad is running low on energy, Arctic 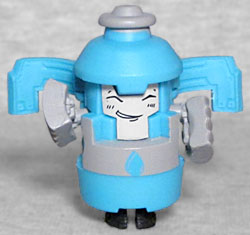 Guzzlerush gives them the cool fuel they need to get back in the game. She helps them reboot and recharge. She never runs out of energy, so she's always happy to share.

AGR's face matches the peppy personality put forth in her bio: she's smiling so big her eyes have closed! The art (seen below) makes it clear the original idea was to have the lower portion of the bottle open as well as the face, revealing a more distinctive body within, but that didn't happen - what we get is a very barrel-shaped 'bot with two weird wings sticking off her back. 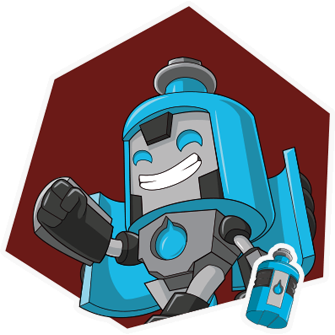