Series 2 of the GI Joe Kreon packs have been released, and they're selling 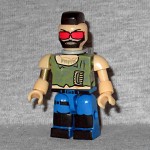 out fast. Faster than fast! I lucked into two full boxes yesterday, so using the blind-bagged GI Joe Kreon decoder, I was able to grab the ones I wanted.

Sadly, the Joes don't have cute little bios the way the Transformers do, so we don't know how itsy-bitsy Lego-ized Ripper differs from his real-sized counterpart. But considering how cartoony his filecard was to begin with, they probably wouldn't need to change very much.

Kreon Ripper does a very nice job of re-creating the full-sized figure's outfit. His chest block is olive green, with a tampo on the front to turn it into a camo shirt - darker green spots, plus some pinkish-yellow to suggest his torso visible beyond the edges. His necklace is painted on, as is the knife sheathed on his left side. The upper section of his right arm is painted gold, because the original toy wore a big, thick band up there. His legs are blue, with black to create boots and the strap around his thigh. His belt is given an impressive level of detail. His face is painted with his big red sunglasses and his bushy black beard, and in order to create his mohawk, he gets a new piece that plugs into the top of his head. Nicely done! 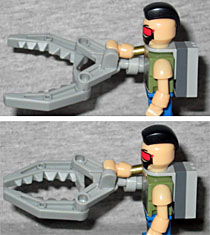 Ripper's trademark weapon was a spreader from the Jaws of Life, and the Kreon tries gamely to give us that. It's built from three pieces, so it ends up being bigger than Ripper himself. The end is soft PVC, rather than hard ABS, which gives it a bit of a play feature: the "jaws" can actually pinch closed! The teeth on the arms make the weapon look more like a clamp than a spreader, but like we said, this is a great effort for the style and the size. Ripper even has a few pieces on his back to suggest the frame/generator backpack he wore to power his tool!

And all that is nice, but none of it has anything to do with why I bought this set:

yes, even despite my love of Zartan/Dreadnoks, I wasn't planning to get Ripper. And then I saw the final piece he comes with. It's just a simple silver barrel block, the sort you might find in any random Lego set. But it gets a purple tampograph identifying it as a can of grape soda, the Dreadnoks' beverage of choice. Yes, I got Ripper because he comes with grape soda. Even though Kreon hands aren't designed to have blocks plug into them the way Lego hands are, and thus he can't actually hold the can. Still, I hope there are more Dreadnoks in future series, and that they all include a can, so we can build a full six-pack.

But then somebody needs to come with a box of chocolate-covered doughnuts, too.