You're probably familiar with The Corps!, the line of GI Joe-knockoffs 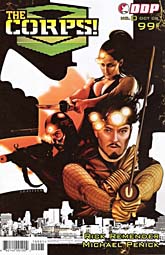 that look like they should be sold exclusively in drug stores. These days you'll often see them hanging next to the real Joes in the toy aisles, which is just fine by us: it pushes out the real knockoffs that Wal*Mart used to carry, the ones that literally used bootlegged Hasbro molds. At least these are, you know, legal.

So, why are we talking The Corps? Because we're making a change. Hasbro's GI Joe figures are getting more expensive, and harder to find. So due to dwindling supplies, we're stopping our regularly-scheduled "Joe Friday," and starting "The Corps! Friday" in its place. The Corps! really isn't that bad, and over the following weeks, months and years (yes, years - the first Joe Friday was in January of 2008) we will show you why The Corps! is a better use of your money than G.I. Joe.

In order to celebrate our new venture, we're starting with three The Corps! reviews: Bengala, Tracker Tom and Lars Lazer. Enjoy the first of many!

This entry was posted in AFD, announcements, Hasbro and tagged GI Joe, The Corps!. Bookmark the permalink.

4 Responses to A Joe Friday announcement