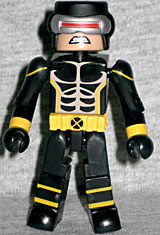 After his wife died, Cyclops was ready to hang up the cape, so to speak. But him quitting heroing would have led directly to the end of the world, so Jean gave him a push from beyond the grave, and he stuck with the X-Men instead. Recognizing how important costumes were in public releations, he put the team back in spandex. This Minimate does a good job of duplicating the costume design, with one major caveat: he's painted black, when he should actually be in dark blue. It's like the Bullseye problem, but in reverse. And the yellow stripes on his legs are incomplete: the ones on the shins don't go all the way around, and the ones above the knee are missing entirely.

Cyclops is back to wearing a full-head mask, so this figure gets the one recycled from the Giant Size X-Men box. If you take it off, you'll see the tremendously ugly Frank Quitely face has not been repeated here. Yay! His eyebrows are mysteriously high, though, so he ends up looking surprised, rather than the "angry" his gritted teeth would suggest.

Speaking of the last Cyclops, he came with an Emma Frost. So does

this one. Of course, this one's actually wearing an appropriate costume. This is John Cassaday's Emma design, which fixed the many, many things that were wrong with Quitely's crap. For one thing, it's possible for this design to exist in physical space. You know, a world that has things like gravity and Newtonian physics. Amusingly, while the last Emma shared her hair with Mystique, this one has the same hair as Rogue. She should really have a cape, since she always wears one with this costume, but there probably wasn't any way to get the proper "off the shoulder" design for it. The figure does a good job of suggesting Emma's curves, and has even given her the proper blue lipstick. Like we said in the DOFP Wolverine review, they could have made this Emma in her diamond form - the last one didn't have that ability yet.