I made a very short return to the Big Apple recently and as such had to make a quick perusal of all of the midtown classics - Times Square Toys R Us & Midtown Comics and the Rockefeller Center Lego Store. I hate to play into cliches but there is something quite nice about NYC and particularly the shopping there contained. Call me a consumer, a materialistic or a tourist and you'd probably be right but gosh-darn are the sights and sounds a real treat after months of average stores! 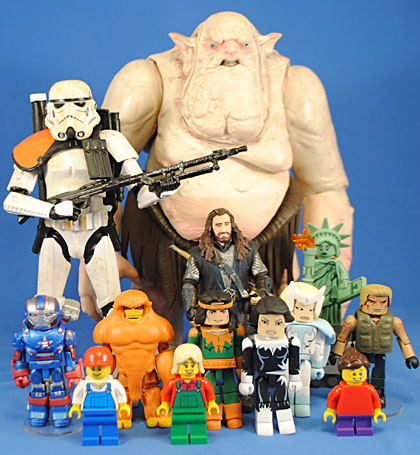 Bridge Direct - The Hobbit: There and Back Again: Goblin King & Thorin Oakenshield 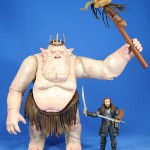 Thorin is another solid 4" scale figure from this line. He comes with his sword, oaken shield and Orcrist plus its sheath, which plugs into a hole on his back. He has balljoints at the major points and while any ankle articulation would have been nice the only problem with this figure is that his shield barely stays attached to his forearm. The Goblin King is, well, big. His staff seems overly simple in style/detail to me but his crown turned out pretty well, it has a small peg on the underside at the back to hold it on the head - a big plus as I figured the crown would just slide all over the place. The main flaw, though, is how bad his paint is. He's cast in a pale flesh-tone plastic and has a nice light-gray wash for a dirty look but he has a very liberal helping of pink on certain areas which is so thick and so hard-edged it looks, well, frankly awful. Overall, though, this is a good set and a solid addition to the collection but in all honestly the careless handling of the pink splotches all but ruins its appeal. 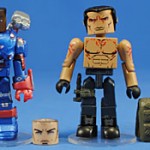 I generally dislike the idea of 'Iron Patriot' but it's inclusion in Iron Man 3 made logical sense but man... it really did seem like they shoehorned Rhodey in because of some contractual obligation rather than story relevance. It even seems like he had the least screentime in the armor of it's multiple 'pilots,' which is no doubt why he also gets an alternate James Badge Dale head - neat! But darn it, where's my Bill Sadler Minimate!? Iron Patriot's another solid "iron armor" Minimate, though the shoulder cannon seems to be a little too restrained in its posing options. The other figure is a generic Extremis Soldier, which is one of the blandest and most forgettable bad guy armies I can think of - indeed I can't even say if this is that good of a figure because I can't remember what any of them really looked like. It's really too bad because DST handled it really well by giving us an alternate hairpiece (which is way too loose on the head, though) and a removable vest so that you can have different looks. Other than the boring character design the only downside is that the Soldier's skintone doesn't match the Dale head's so you can't create a 'mate of him. This is a great and perfect set - with all of the different looks for each figure it'd be worth it to get three or more... but, alas, both characters are relatively so forgettable that even I have no interest in doubling up. It's the movie's fault, not DST's. 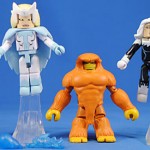 Alpha Flight is one of those teams I really have no familiarity with beyond just a tangential awareness based more on the existence of other toys than anything else. This set is probably the least exciting of the sets, but at the very least we get Sasquatch. I was surprised and a little bummed that his torso piece covers the head too, so there's no real head/neck poseability. He gets new forearms and feet/legs too which I wouldn't be too opposed to see reused for a Beast 'mate. Aurora completes the duo started with her brother in the first set and she too gets alternate white and black hair (the latter of which is really hard to get on her though for some reason). The cool thing, though, is a new hand sculpt that's essentially a "holding hands" piece with two forearm pegs - presumably she and Northstar fight using the buddy system. Snowbird has an interesting face but her hair is so thick that when combined with her cape she's permanently looking down a bit. There's 'not-Apache Chief,' Shaman, whose green costume does add some blessed visual variation to the set. I'm all for completing teams but I'd be hard pressed to call this set exciting. 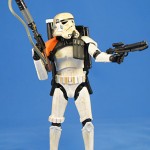 I'm the only person I know who NEVER had any interest in Hasbro taking SW to this scale so between that and the $20 pricetag I've been dragging my feet on collecting the set. I've heard that this army-builder has been, unsurprisingly, hard to find so I bit the bullet and paid the Times Square upcharge to get him from the flagship TRU. And you know what... I'm fairly impressed. The sculpt is darn good and the articulation is some of the best in years, plus he gets three guns plus the backpack! Ultimately, I'm only lukewarm on this figure though - he has the least realistic, least subtle brown wipe for "dirty look" imaginable (what a sentence!). And this was the best of the three they had! The other big problem I have with this guy is his narrow grip on the left hand - he CAN'T hold the Sandtrooper's signature barrel gun!!! What the hell!? This sculpt is essentially going to be 90% reused for at least one more figure so what... you couldn't afford a unique hand to do pretty much the only thing this guy does!? Boooo! While I'm clearly disappointed the pluses here are quite strong and I will certainly be getting the rest of the figures, I must confess. 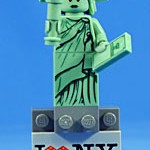 Last time I went to NYC I sort of decided to start a "toys of the Statue of Liberty" collection so when I saw this sucker I was hooked. This is simply a re-release of the mini-figure from the 6th series of the Collectible Mini Figures line which is a-okay since it turned out so well. Like all Lego Magnets she is unfortunately glued together and onto the magnet. Her torch, tablet, head and crown are removable, the rest of the bricks are affixed permanently. Well almost - shockingly the "I ♥ NY" brick is removable too! It's a pretty nice printed 2x4 flat and the heart is formed by an L brick rather than two of those "keychain" 2x2's with the rounded end as they normally do. The world is becoming so homogenized these days it's always a bit of a thrill to find something unique and exclusive to an iconic store/location. This is also a perfect exclusive as it's in no way a hole in the collection, just a great keepsake. 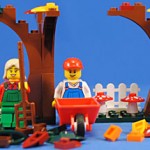 The second in Lego's new higher pricepoint Seasonal Scene polybag series has arrived. This one puts the previous two to shame by including three mini-figs! Sure they're all generic and use pretty familiar pieces but the more the merrier. Like the Spring Scene this one includes many useful bricks, like the tree branches and mushrooms, making it tempting to double up. I particularly like the design of the two trees - they work independently but can also be pushed together to form one bigger tree. The thing that annoys me here is the glut of pointed 1x1's that are included for the sake of scattering around as fallen leaves... a'yawn! Well, at least they're in interesting colors so they should be able to be incorporated into MOCs pretty well.