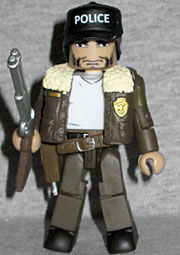 Rick's best friend and partner on the force, Shane watched after Rick's wife Lori when Rick was shot and lay in a coma for months. But after the zombie outbreak, Shane didn't expet to ever see Rick again.

Confession: although I've read The Walking Dead, when Shane showed up on the TV show, I didn't remember he was a character from the comics. He's wearing his POLICE hat and his work jacket. It's brown, with fur trim around the collar, and eagle emblems on the shoulders. The badge on his chest is sculpted, and so's the name tag on the other side. He comes with a pistol and a shotgun, and an extra set of bare arms if you want to remove the jacket. Well, mostly bare: the sleeves of his T-shirt are still there. The detailing is minimal, but it works.

Survival tip: if you have good aim, a bullet will stop a zombie quickly, and at a safe distance. Remember, only a head shot will do. But if a zombie can be 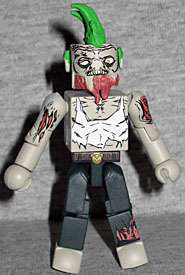 safely dispatched with a sword or club, it's better to save your ammunition.

That bio doesn't really have anything to do with this zombie (based [very] loosely on one seen in issue #30 of the comic). He's barefoot, and wearing blue jeans, and has a large wound on his left shin. His white tank top is ragged, and the flesh on both shoulders is ripped away. He has a mohawk, but not the same one Storm had: it's taller, floppier, and connects to a ring of hair that also provides the zombie with ears - an interesting design choice. His head is actually a new mold, with torn cheeks and a big, floppy mess of tissue in the center of his mouth. It's all sculpted on, not just painted, which is a bit of a departure for the line, but is subtle enough to add to the "unnatural" look of the figure without breaking the aesthetic. And it's easy to miss, but he has a painted nose ring.