Ho-lee bejamberust!!!! WHAT A WEEK!!! Ever wanted something freshly released, Rustin? Well here it ALL is! Brand new Pacific Rim, brand new Predators, brand new GI Joe, brand new TMNT AND a complete set of Adam West Batman figures - yes please. It was a very expensive week, but it was a wildly lucky and exciting one too! 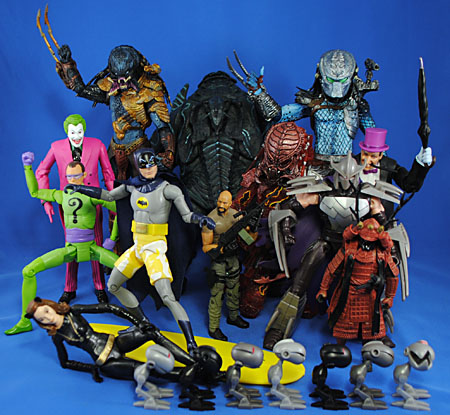 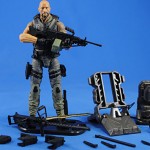 The Rock was surprisingly one of the best things about Retaliation so I had decided to get this more movie-accurate figure were I to ever see it. Well... I saw it, so I got it. He's absolutely loaded with accessories, though sadly it's kind of a pain to get him to hold the two large guns. He gets the cool-idea handle/grips that have a million different attachments, though I don't recall ever seeing them in the film (though they've been all over the toys). He also gets a giant backpack and a string pack. It's honestly a bit more than I know what to do with and I confess a lack of understand with the backpack, but at least the hand-grip-weapons clip onto the belt and the various knife/baton attachments have sheaths on the vest. The likeness is sadly only okay with it seeming some of the earlier figures nailed Dwayne better. The vest is removable and I really dig that they included his bicep tattoo. As far as Retaliation Roadblock figures go, you certainly can't do much better, though any interest in the film I once had has long since cooled. 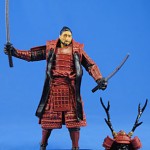 I can't believe they made this guy but I am so incredibly excited that they did! Like most things in the toyline I have no recollection of this dude being in the film but who cares!? It's a fully articulated 4" samurai!!! He gets two katanas that fit loosely in a belt loop and a removable helmet. The helmet fits on well and looks pretty great considering the scale and usual state of removable head gear. The torso armor seems to ride a bit high, but I think that is just a matter of the "cloak" part being sculpted tall. Articulation is really good, pretty equal to most figures in the line, though I did expect a bit more. The head makes me think of Jimmy Smits/Bail Organa or any number of Clone Trooper variants, so do with that what you will. This is just a darn cool looking toy and I hope to see it re-released in different colors throughout the years to come! 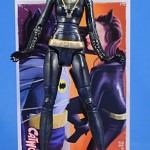 I stumbled on a fresh case of these at a Toys R Us (indeed all the blisters has a "Only at Toys R Us" sticker on them - did we know this is an exclusive?) so bad paint be damned, I got the set. Newmar Catwoman turned out pretty darn good. I really like the sparkly paint on her body suit, and her far and eyebrows are very crisp and clean. I think I would have preferred for the domino mask version, but perhaps they're saving that look for Lee Meriwether. This is one of those figures that you can really feel the lack of double-jointed elbows when posing. Catwoman was never one of my favorites, I liked the more outlandish, colorful villains but there is no denying the indelible mark left on the world by Newmar and this outfit. 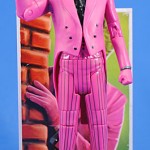 Classic Mattel... the using of colored plastic over paint makes this feel the cheapest of all the figures, at least to me. I am tickled by the light gray paint for the mustache but I think they went a bit too far there, sculpting it is enough. Overall the colors are well chosen, but again the brightness of the plastic coat betrays some translucency and therefore "cheap feel." The pointing finger is a nice touch but feels a bit awkward. Maybe they could have included alternate hands as accessories. Still, all things considered this is the most anticipated character and while isn't awesome nor awful is that typical Matty "meh." 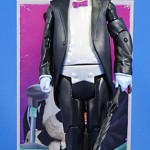 A reasonable likeness here which is par for the course from Matty, but I really, really, really wished they'd stepped up their game on this line. The costume isn't the most exciting so the likeness really could have helped it. He gets the rarest of all things - an accessory! The umbrella is pretty good, though it did get warped in the package. In fact, QC is all over the place here with tons of paint slop and a lot of warping on this figure. He's got a gap in his waist and his cigarette log is, of course, bent as well. I understand that Mattel is run by accountants and lawyers, but come the hell on... paint the cigarette white, from crimneysake. 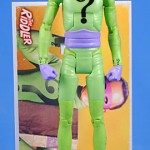 I really dug the Riddler on the show while growing up and have only fallen more in awe of Frank Gorshin's genius as I've grown up, so I'm pretty jazzed for this figure. His bright greens do have a bit of that "cheap feel" as with the Joker but where he really fails is the so-called likeness. He looks more like Bob Newhart than anyone, but actually doesn't look like anyone. I appreciate the little paint details, like the uneven hairline, the many ?s and the slippers but this figure, being so slender and accessory-less, really highlights the rip-off that this line feels like. Parumph. 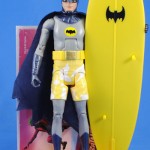 This is exactly the silliness I want from that show and this line. I passed on the carded Batman since I already have the Batusi one and hope to get the Batman/Robin two-pack and I gotta say that aside from the needless "mural" on the back of the "collector cards" it's working out great for me. The trunks on this guy turned out pretty well and I appreciate that the surf board's fin pops out so that you can have the board flat on the ground. Paint and likeness on this figure seem to be "best of the series" which probably says a lot when that honor goes to the guy with almost a full mask. Ultimately I'm quite pleased with this guy and the pending Surf's Up Joker, though I think they would have been better off doing them as the two-pack with a wave diorama/base. But of course I'd probably never find that one either. It'll be interesting to see what other Bat-variants they cook up. I'm really, really hoping for a pink cowl Batman (since that episode/image sticks out the most in my memory) and beyond and unmasked Batman I don't know what else they could do. 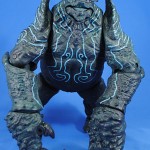 I had a big, long rant planned but you know what, I'll just cut to the chase - I'm incredibly disappointed by this figure and can't imagine buying any more Pacific Rim figures. 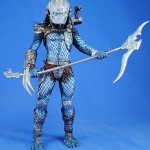 KENNER!!!!!!!!!! I was initially not that into this guy but this is one of those incredibly rare instances of production product surpassing the prototype. His strength is his paint - vibrant, gorgeous blues and silvers! He also has the best/most-accurate netting paint lines I've seen in the entire line. He's basically just a repaint of the recent Jungle Hunter with a new mask, forearms and lower legs but he still looks great. His scythe looks awesome too despite it's odd curve, plus he can hold it quite well. The only issue here is that his hips are pretty loose on mine so standing/posing is a bit rough, but beyond that this guy is effectively flawless. 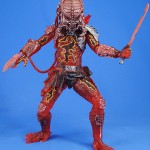 KENNER!!!!!!!!!! I HATED the original Kenner figure this is based on all the way back to the first time I saw it on shelves. It's always been THE definition of "Awful '90s Toy" to me, so of course NECA had to chose it to re-do, and of course they knocked it out of the guldarn park! He's pretty much the City Hunter with new lower legs, forearms and mask but the changes go a long way. I love the U-shaped wrist-blade (which still extends out a la the previous Predators) but it's the mask that's the real home run here. The paint is darn good, but very bizarrely it stops on the sides so that there is pretty much zero paint on the back. I'm sure that's to give him a "cloak" option for some folks, or maybe a reference to the original figure, but as is it seems like they just screwed up and forgot to finish him. Still though, another damn cool Predator to add to the shelf! 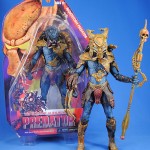 KENNER!!!!!!!!!! This guy... man... this guy... How cool is this figure!? I generally disliked the "Super Predators" from Predators but their ridiculousness makes for perfect bases for '90s updates. The colors at play here are just gorgeous and the sculpt is just as good. I particularly love the huge claws on his right gauntlet and the skull staff is glorious. I also love the mask and am thrilled they've finally done a removable mask. The leg joints are a bit weak on this guy too but he hasn't yet fallen over on me, so no fretting as of yet. This wave series gets awesome card art based on the Kenner card and frankly I love it so much I had to get an extra figure to keep carded to enjoy the full look.If you're into Predator at all, you have to get these figures, and if you get only one make it this guy, though all three are great! 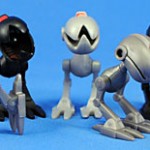 I love the idea of this set, but I've got to say seven seems a bit cheap - were it eight (and thus ~$1 per Mouser) it'd feel like a more appropriate deal and I'd be getting more. You get three light silver Mousers, two medium/dark silver and two black. I don't understand the black Mousers nor do I like them, but maybe that's from the show - I would have preferred all of them in shades of gray or silver. The only paint on each is the red eye, except for the black ones who get a red wash in their lower jaw to highlight the sculpted grooves. It's a shame it's only on those two because it adds a lot and would be very welcome on the others. Each Mouser has the same sculpt and articulation: swivel hips, ball-and-socket head (plugs into lower jaw) and hinged jaw. You actually get a decent amount of posing out of those four points and I have to admit I like these much more in hand than I expected. I'll likely get another pack as a result. 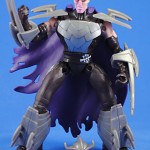 Oh how I have been hunting for this guy. The first Shredder was a bit of a letdown and this one fixes some of that. First and foremost, his long wrist blades which finally makes him threatening and an appearance that lives up to his name. He also gets a very cool cape, which plugs into a hole on his back. The big feature is a removable helmet, but that's about as exciting as a Boba Fett figure with a removable helmet. The important thing is that it fits over his head well (though it does come of VERY easily). Shredder 2 gets balljointed shoulders and hips with swivel neck and wrists plus hinged knees. Due to his feet there's little posing you can do with his feet but it's the lack of elbow articulation that "ruins" this figure leaving him in an aggravating pre-posed stance. Still though - it's Shredder and it looks cooler than the previous one, so it's worth getting.