Genetically-engineered by the Skrulls to defeat 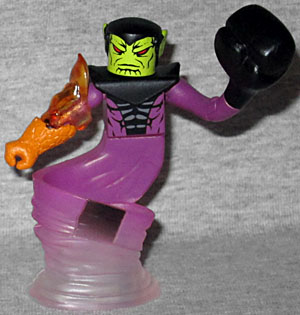 the Fantastic Four, after they stopped the Skrull invasion of Earth, Kl'rt possesses all of the FF's powers. His pride and tendency to look down on others is not unique to him, but a characteristic of the Skrull race in general.

To give you an idea of how long ago the last Super Skrull Minimate came out, it was a Tower Records exclusive. This one uses the same head piece and shoulder-spikes, but has enough pieces to make a plain Skrull if you want. To "Super"-ize him, there's a rocky forearm, a fiery piece for his upper arm, a stretched-out arm with an inflated fist, and a version of the wrapping legs base that fades to clear as it nears the ground. He also gets a simple fireball that fits over his normal hand. This is a really nice Super Skrull figure.

This undercover CIA agent complements her physical abilities with 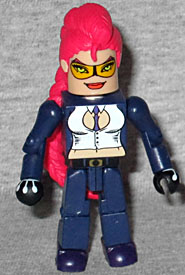 a special battle suit she created, which is equipped from head to toe with "covert fighting tools." Her diligence and efficiency have earned her the nickname "Miss Perfect," but she is also a loving mother.

Look, it's the only new character introduced in Street Fighter 4! The figure looks mostly black, thanks to her pants and jacket (they're painted blue, but are dark under normal lighting conditions), but of course she's got that straining-to-close dress shirt and the small necktie tucked between her ample breasts. Sorry, Crimson, but when your clothes make Chun-Li and Cammy look practical, you're doing something wrong. She has no accessories, though her gloves are painted with the "Thunder Knuckle" taser pattern, and you know they had to mold a new piece to create her Janelle Monae braid thing.