Barney Ross is the leader of the Expendables, an elite team of mercenaries hired to depose the dictator of the island nation of Vilena. But his rival Trent Mauser was right - the job has "trouble" written all over it, and Ross is drawn into the conflict with ex-CIA operative James Munroe and his right-hand man Paine.

(Since all the "characters" in The Expendables were basically just the same people their actors always play, we'll just call them by name. You understand.) 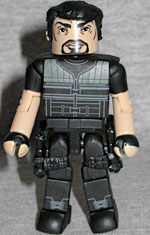 Barney Ross is named after a real man, one whose real life kind of mirrors Sylvester Stallone's movie career: he started as a successful boxer, then became a soldier. Sylvester Stallone is wearing all black: pants, boots, belt, T-shirt and gloves. There's a little bit of paint on the legs to create his boots. He's wearing a heavy bulletproof vest, which also gets grey paint apps to keep it from being a formless black lump (if you remove it, his chest is painted to look like a tight T-shirt). The likeness is a decent representation of Stallone's new Asian face, and probably uses about the same percentage of plastic. He has two holsters on his legs, but they seem too small for the guns. 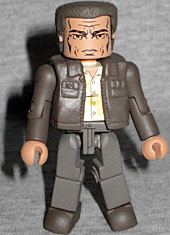 The Expendables was Arnold Schwarzenegger's first film in six years, thanks to his political career - thus the joke about Trent Mauser wanting to be President (Arnold was first offered the Bruce Willis role, but he wanted to just stick to a cameo). Since he's not actually involved in the story at all, his clothes are a bit more casual than the rest - and not at all black. He's wearing a brown jacket over a flower-print shirt, with brown-grey pants and darker shoes. The hair this figure uses is the same the Terminator 2 Minimates used, appropriately enough, and his skin is much more orange than Stallone's was. Art Asylum has had so much practice making Arnold Schwarzenegger Minimates, there's no mistaking who this is even with the added wrinkles. 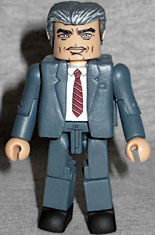 The villain of the movie is Eric Roberts, an actor who hasn't gone a year without a release since 1987, and yet still isn't exactly what you'd call "famous." Since he's just wearing a plain grey suit, you could easily pass this off as a Dark Knight version of Sal Maroni. The toy duplicates his bright blue eyes, and every line of his face (except his nose, of course, because Minimates don't have noses). He's painted with a red striped necktie; even though we can't find any pictures of him wearing that kind of tie in the film, we assume AA had reference material that showed it. Oh, and the character's name is James Munroe, because why wouldn't you want to confuse him with the fifth president of the United States? 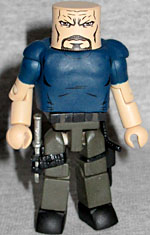 Steve Austin (but named Dan Paine). Remember that time Steve Austin beat his wife? Hey, if people can harp on Hank Pym - a fictional character - for one accidental incident more than 30 years ago, then we can remind people that a real life man did it multiple times a decade ago. Of course, in his case it was because of the steroids WWE was making him take, something this Minimate pays honor to by way of one of the anatomical "powerhouse" chest caps. If you don't want him to be (as much of) a roided out freak, you can take the chest cap off, and he's still fully painted beneath it. He's wearing a dark blue shirt, a black belt, brown pants, and black shoes, and has two holsters strapped to his legs: one for a knife, the other for a baton. 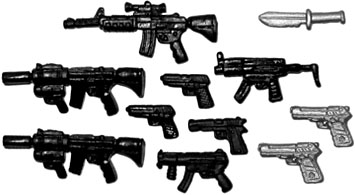 And of course, there is also a huge assortment of weapons included. Beyond the ones we've already mentioned, there are two M-16s with scopes, a silver knife, two rifles with grenade launchers, two small black pistols, a black handgun, an HK94, an MP5, and two silver handguns. Even if you're not a fan of these figures, it's worth getting the set just to have an arsenal of accessories for your other Minimates.

Although these figures were released to coincide with Expendables 2, they're all clearly based on the first movie. The Statham-Crews-Willis-Rourke set was available through your local comicshop, while the Stallone-Schwarzenegger-Roberts-Austin set was only available at select Toys Я Us stores.

Pages: 1 2
This entry was posted in Art Asylum, MMMR, TRU and tagged Minimates. Bookmark the permalink.

1 Response to Minimate Mini-Review #155 - The Expendables