Helen Grosvenor bears a strong resemblance to the ancient Egyptian 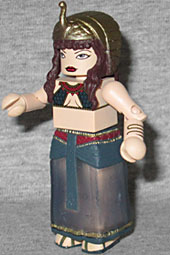 princess Anck-Es-En-Amon, and may in fact be the princess reincarnated. This makes her a prize to be won by the resurrected priest Imhotep, who wishes to be reunited with his beloved.

This is a pretty spectacular Minimate. The costume in the movie was unbelievably sexy for the time, with a sheer skirt and a sling bra. This figure duplicates both those features (the bra is painted, the skirt is translucent molded plastic) as well as her curly hair and fancy vulture headdress (appropriate, since the real Ankhesenamun was from Upper Egypt), and the snake bracelet on her left arm (she wore them on both arms in the movie). There's no way the cloth on her hips was this dark blue on the real costume - in the black and white world of the film, it was way too light to match this. It does look really nice here, though. 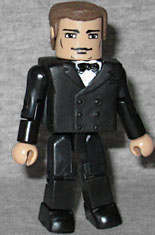 Ten years ago, archaeologist Joseph Whemple unearthed a mummy, only to later find his assistant murdered and the mummy gone. Today, his son Frank follows in his footsteps and is intrigued when a man named Ardath Bey brings word of another tomb.

When Rustin got this set, he (rightly) pointed out that a plain dude in a tuxedo is way less interesting a Minimate than a "civilian" Ardath Bey would have been, but this figure, with his unique chest cap and generic handsome-guy face, does have a different, unmentioned benefit: David Manners, the actor who played Whemple, also played John Harker in Dracula, so this single figure could fit in either film.

This set was one of the TRU-exclusive sets for Series 3, but Princess Anck-Es-En-Amon was intended to also come in the four-pack, making boring-ass Frank Whemple the only real exclusive in here. Of course, then the four-pack was quietly cancelled, so this set was the only place to get her. Frank may be a yawn, but the princess is the bee's knees!