Heroes of the World: Goddess Durga

We were recently contacted by a toymaker with an interesting project: 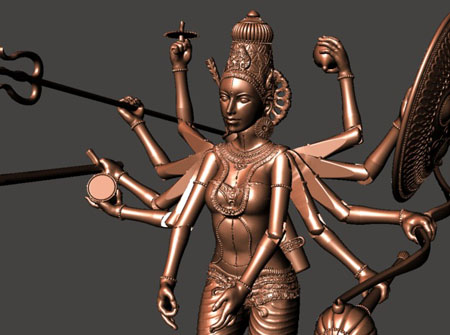 I'm at work on a 3D model of a 10-armed warrior goddess action figure, of Durga, a demon-fighting Hindu goddess. It's the first action figure ever made of this goddess, and the first to have 10 fully articulated arms!

There's also a "greater good" reason for all this. Durga is the first in a series of "Heroes of the World" action figures celebrating makers and doers from around the world, including warriors, scientists, artists, and inventors. The next will likely be Ada Lovelace and Nikola Tesla.

The goal of the series is to encourage adults and kids alike to overcome obstacles and pursue their dreams by introducing them to inspiring characters and new role models.

The figure isn't for sale yet, but you can see how things are progressing on Shapeways. That's some pretty complicated design/engineering to get all the arms moving, so it'll be exciting to see if it all comes together.