As I discussed recently I was able to hit up my beloved store at the U.S. Playmobil Fun Park in West Palm Beach last summer and, true to form, I bought waaaaay too much. I've already gone through the Add-On purchases I grabbed from the awesome "Wall of Direct Service" so now let us take a look at all of the retail sets I got! 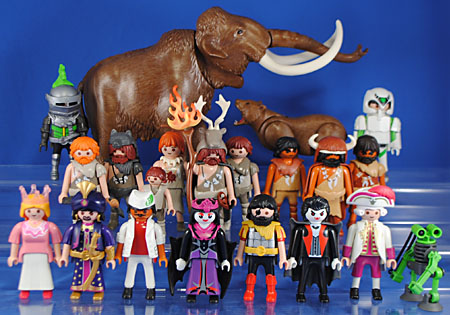 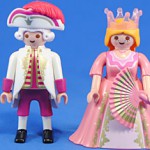 The two-packs started as a Target exclusive thing back when they still carried Playmobil but the format has survived that chain and has finally come into it's own, offering truly unique pairings such as this. The woman is nice, though a fairly standard Lady in a large pink dress. She gets a nice fan that actually has some printing on it as well as an oddly translucent crown. She may be unique but she doesn't strike me as something especially, well, special. But then... we get Duke Dandy Fop - the frenchiest Frenchman available! As soon as I saw this set I knew I had to have this guy, he's just too fantastic to be without. I'm not sure if that wig is new but it looks great and while the colors are a bit bland they certainly ring true for the court of Versailles. I can't think of anywhere he fits in, being too historically accurate for the Fantasy theme but out of sync with all other historical themes, but that's okay - it only increases the sheer novelty of him! 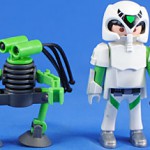 A space guy and a robot? Sure, why not. Playmobil has a looooooooooooooong history at failed attempts at future and space themes and this certainly ties into the latest flop. The guy actually kind of works for me. He was a little too bland at first but the more I look at him the more I "get it." He gets a weird, novel ray gun too. The robot is... something else. He has a swivel neck, shoulders and waist with sideway-hinged hips and feet. Weird rubber dreadlocks stick out of the back of his eyes and his feet are suction cups. It's just like a perfect storm of, well, I don't know actually... The ideas are sound but the final product is fairly weird. Kudos for at least thinking outside of the box, but nothing has really topped the old fake-R2-D2 droids from the '80s. 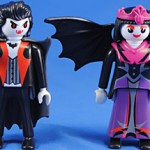 This set is AWESOME!!! 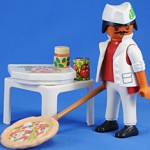 Playmobil is trying something interesting here - instead of releasing a Pizzeria set to retail, they offered one or two accessory packs as Add-Ons to their base System X store in the Direct Service Catalog, so in theory you could just make your own. This guy ties directly in to that, and while I have no love for System X or interest in the City theme, how could I possibly pass up a toy pizza!? The dude comes in a nice semi-chef outfit and is packed with a little table, a two-piece pizza box, a can, a jar, a pizza picker-upper-thing and, of course, a PIZZA! The box is fun and I really dig the long handled... man, what's the word for it? Not spatula... anyway you know what I mean. But obviously the star here is the pizza, a vast improvement over the rectangle one from Fi?ures 1. The only real frustration here is that the can and jar labels are just stickers we have to apply ourselves, and they keep coming off. Very annoying. Still though, this is a fun set for the Special Plus format. 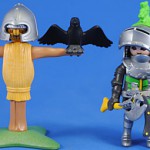 The Knight is all right. He's colored well enough to be historically accurate or plausible (despite coming with the ridiculous dragon axe) and I enjoy his sculpted-armor legs and arms. I just really prefer "team colors" and while I know most Knights had their own colors and insignia, I'm just generally more a fan of uniformity. The real star here, like most of the Special Plus line actually, is the accessory. The training dummy has been around for a while but I've never managed to get one. He's essentially the same as the scarecrow but now with chain mail hair and a helmet. He gets a crow or raven and a mace, for ultimate training. It's just a great, fun prop for building out the dioramas!

Playmobil - Special Plus: 4769 Barbarian with Dog at Campfire 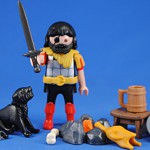 This is another one that's worth getting for the accessories alone. One can never have enough camp fires, mugs or stools but it's really the chicken that's most special. The set also came with a long wooden branch/staff for roasting the chicken over the fire but some how I've lot it between opening and photographing. While I got this set for the accessories, the figure has certainly grown on me and I can absolutely see him sitting around the fire with other swords-for-hire sharing ribald tales on battle's eve. In fact, I wouldn't be opposed to them just reissuing this set with a different figure every couple waves to build up that "team."

Playmobil - Special Plus: 5295 Magician with Genie in Bottle 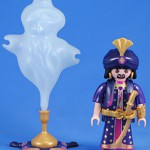 Awesome awesome awesome. Awesome, awesome awesome awesome, awesome awesome. I had missed out on the original genie in a bottle release so not only am I happy about it getting reissued, this set is UNBELIEVABLY COOL!!! The genie is sculpted in relief so I image you could have some fun light effects turning him around too (kind of like the "staring busts" at the Haunted Mansion). He plugs into the bottle which, in turn, plugs into the pillow. It would have been cool if he were cast in a red rather than blue, but my only real issue is the unsubtle hands. He's still pretty cool though. And then... we get The Guy. Glorious. Gorgeous. He is perfection. I do kind of wish they had used the orange skin so that he'd fit in with the other Middle Eastern figures but this is fine. The dark colors, goatee and angry eyes... this has got to be Jafar. I just... this is the kind of amazing set that I just want to have lots of, but it's so singular I'm not sure what else I would do with him, let alone where does this guy fit? Egypt theme? Traveling visitor to the Castle theme? Ultimately it doesn't matter because he is AWESOME!!! 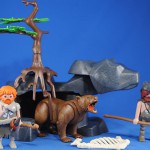 Sadly, the Stone Age theme only lasted one year, a real shame because each set is truly stellar, but since it was discontinued the store was clearance-ing them out giving me a chance to complete the collection! This is a really fun set with two of the more modern Stone Age guys, as evidenced by their awesome chipped stone tools. It comes with what I believe is an all new Bear complete with articulation and painted mouth! The set also includes a very cool cave that resembles the profile of a bear. Usually that kind of thing bugs me but here Playmobil has nailed it, plus the "head" is on a swivel so the effect can be lessened or even removed as desired. We also get a neat tree with overhanging roots. It has pretty cool new branches with the green leaves and wood branch molded together. It's a great effect but sadly leaves the piece flat and thus it feels a bit lacking in terms of foliage. It is still a great set as is - tells a story and includes welcome pieces that can be used with a number of themes. 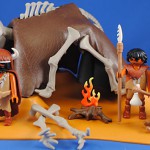 This is one of the two signature sets of the theme, both of which feature Mastodons. This is home base for the Wagabu and is built out of a Wooly Mammoth hide and skeleton - DEFINITION: COOL! But it gets better, you see they include all four legs, despite only two being needed for the design, so that you can have a full skeleton! Makes one want to start a Natural History Museum display just to display it! The camp is built on a new base plate and we get three Wagabu, including a chief, plus a dog and a campfire. I do really wish they'd included a woman here as they're so under-represented in the theme but this is still such an excellent set I find myself really wishing I'd gotten a second. 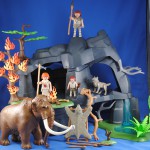 THIS set is phenomenal. Where to start? Well, the core of it is effectively our first Playmobil Mountain! It's built out of more pieces than I expected but pretty successfully comes together aesthetically and is plausibly realistic. Like the Bear Cave above, this one resembles a Wooly Mammoth, obviously, and I'm very impressed by how subtly effective it is, they even worked in tusks and a water spray from the trunk! I like, too, that it's basically on risers, the water fall section and two rock chunks below the cave (which form a cave/tunnel themselves!), so you can pop those off and have the cave be at floor level, should you choose. I thought the "hovering" grass in front of the cave was a little annoying in photos but it feels more natural in person. The set also includes four Klickies: a Dad, Mom, child and Chief and certainly the woman and child are MOST welcome additions to this male-heavy theme. We also get a dog or wolf and... a Wooly Mammoth! The Mammoth looks great though I was a bit surprised he lacked leg articulation. The trunk does have a hinge joint as does the head, which can also swivel side-to-side, so he does move fairly well. Then, there is a ton of accessories including a bunch of stone tools and a bear hide. We also get a sheet of cave painting stickers, which is very cool (though I'm abstaining being an un-fan of stickers). Really the only thing that's a bit out of place here is the fire-tree. It's on a hinge so that it can "fall" but it's still kind of weird. All in all just a killer set and I would LOVE to see do a run of the mountain in brown and yellow to use for the Western theme!