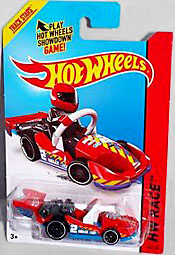 Turns out the Fig Rig was just Step One in Mattel's plan to trick Lego fans into buying Hot Wheels - Step Two is the "Let's Go."

Born: 2013
Birthplace: El Segundo, CA USA
Designer: Hot Wheels
Specialty: "Let's GO" a kartin'! Can you figure out what makes this speedster so special? It's time for your mini-fig to sit down or hang on, and prepare for the ride of its life!

While the Fig Rig was a typically HW-sized truck that just happened to have some Lego compatibility, 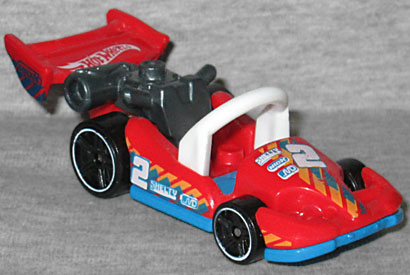 the Let's Go is much more integrated - it is, like the text above suggests, a go-kart, which means that's it's more realistically sized for the figures who will be using it. Like many go-karts, it's designed to mimic the shape of real race cars, with a low, angled front and a high spoiler in the back. The black wheels have thin white rims, and the tires in the back are larger than the ones in the front. The car is mostly red with a bright blue base and a white 2 tampographed on the doors and hood, as well as yellow stripes and a few sponsor logos or something?

The underside of the car has three recesses sized to accommodate Lego studs (or any other comparable knockoff). The engine is exposed, and there's a giant white... steering wheel? Safety belt? Something. It goes over the figure's lap, so it really could be any kind of device you want it to be, as long as that device is something that goes in front of someone when they're driving a go-kart.

So, just like the Fig Rig, the Let's Go has lots of places where Lego minifigures can grab on for a ride - and yes, it really is mainly for Lego,

not other brands. Lego Minifigs are the only ones who have holes in the back of their legs to match the bumps on the car's seat. Now, you can't get a Minifig to put both hands on the wheel-thing at one time, and the butt bumps don't quite line up properly, but it's a nice effort for something that isn't actually a licensed crossover. Figures can also grab the spoiler, the bars in front of the wheels, or the pegs on the engine. The exhaust is sized to fit a Lego stud, meaning a figure can ride with its head stuck there, and there's a bump on top of the engine that can fit in a Minifig foot.

Though they're both fun, Let's Go has the advantage over Fig Rig - not only because it's sized better for the figures, but also because its name is a hint to the line it works with (Lego/Let's Go, Let's Go/Lego). They keep releasing these in different colors, but I started with red and I'm sticking with that color. I'd go for an entire fleet of unofficially Lego-compatible Hot Wheels, so hopefully Mattel keeps coming up with new ways to do it.