Funko's Mystery Minis are not just limited to The Walking Dead - they've also done The Nightmare Before Christmas, Game of Thrones, Disney, Hello Kitty, Marvel, TMNT, How to Train Your Dragon... basically, all sorts of cool things. Including Horror Classics. 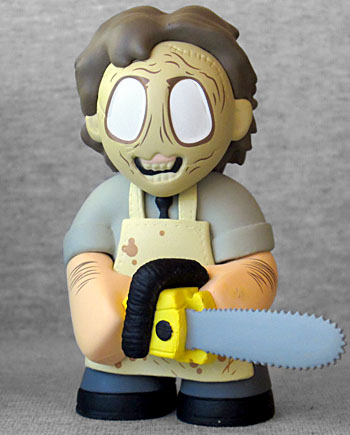 There were a few specific minis that I was after, but since these are blind-boxed, you don't know what you're getting until you open it. You can kind of guess based on weight, so just by virtue of this being one of the heaviest boxes available, I should have known this was going to be Leatherface.

Leatherface has always been a bit of a giant, so this figurine is nearly 3" tall (as opposed to the average 2½" of the others). His pose is very reserved, just him standing there with his chainsaw in front of him, not brandished above his head or anything. 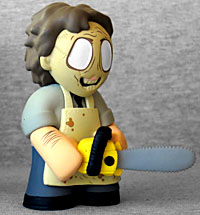 He has the same blank white eyes as most of the Mystery Minis, despite the fact that he's wearing a mask - I guess the implication is that we can see his real eyes through it. There are stitches sculpted on the surface, and wrinkles painted. He's wearing a grey shirt and a black necktie beneath his dingy apron. His pants are darker, his shoes are black, and there's a bit of dried blood splattered on the apron (though there's also a 1:72 "bloody" variant that really ups the red stuff). His yellow chainsaw has tiny teeth on its blade, and there's hair painted on his arms. It's the weird horse teeth that really make him look creepy, though.

The Horror Classics Mystery Minis were apparently produced in smaller numbers than the Walking Dead ones were - a lot of retailers had their orders allocated (meaning they didn't get as many cases as they wanted). Because of that, I couldn't take advantage of my store's trade-in policy to swap him for a different figure.