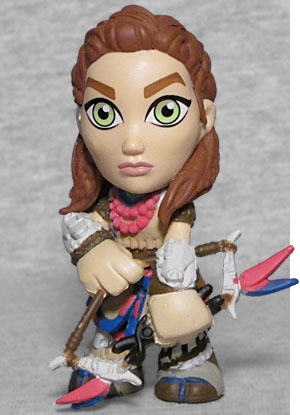 where it was one of the standout hits of the show. In a world of a thousand gray Tom Division's Rainbow Clancy: Battlefield of Duty: The Call: Ghost Warfare Modern Splinter:: Recon Clancy clones, the colorful "techno cavegirl" couldn't help but attract attention. The game was released in 2017, and in 2018 Funko released a set of Mystery Minis - including the main character.

Her name is "Aloy," which may look like "alloy" (because she's in a world where she's fighting robot dinosaurs) but is pronounced "EY-loi." As a baby, she was cast out from her village under ʍվʂէҽɾìօմʂ çìɾçմʍʂէąղçҽʂ, so she lived in the wilds with her adoptive papa, who was also an outcast under ʍվʂէҽɾìօմʂ çìɾçմʍʂէąղçҽʂ. So her goal is to find out her own story, while also mumbling exposition and advice to the player herself like a crazy mountain hermit. Which technically she is.

Aloy is a pretty redhead with dreads and a bow. Uh, an archery bow, not a hair bow. 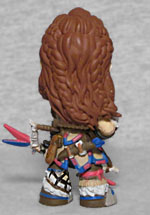 I realize mentioning it right after her hair could be confusing. Her outfit is cream colored with blue and red accents, and has lots of details for its small size and cartoony style, from her bead necklace to the fur and fringe on her boots. She's even got her silver Focus painted in her right ear. She's holding her bow down in front of her, and there's a quiver of arrows hanging from her waist. The art style used for the face is... not wonderful. I'll always be partial to the Horror/Sci-Fi/Walking Dead blank eyes, but even simple black pupils can work great. This attempt to give her almost "realistic" irises doesn't work out really well, and makes the figure unappealing. And that's why I went for just Aloy and not any of the other humans.