The DC Bombshells statues were based on pin-up art, 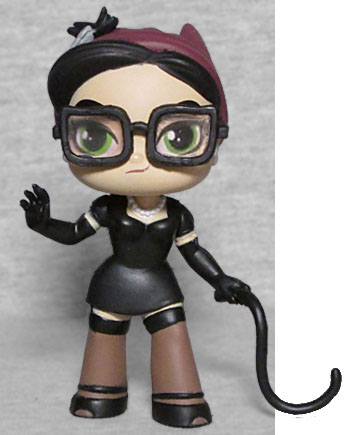 so when it came time to create a comic based on them, Marguerite Bennett naturally went back to the era when pin-ups were a thing: the mid 20th century. Now, unless you're Universal's The Wolf Man, you can't set a story in the '40s and ignore the fact there was a war going on. But just because you're from an Axis country, it doesn't mean you're an Axis sympathizer.

In this reality, Catwoman is "Selina Digatti," an Italian high-society countess and socialite (who just happens to use her position and access to run an international smuggling ring). She's not directly affiliated with the Axis, but has no particular interest in helping the Allies either... until something she steals in one of her capers changes her mind.

Selina is a classy dame, so she's not half naked. She's not even 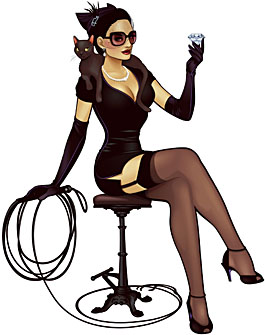 in the process of getting dressed (which, in a few of the concept designs, she was). She's wearing a slinky black dress and garters with stockings. Are the opera gloves to keep from leaving any prints, or just to make her look fashionable? Yes! Her hair is under a purple wrap of some sort that I think was supposed to have a bow on the back (acting as cat ears) but instead just has an inexplicable pair of cat ears (acting as nothing). Was the diamond-studded cat pin not enough? Or the cat eye glasses? She's armed with a whip, but isn't holding any kind of purloined jewelry in her right hand. Most disappointing of all, you can't see her pussy - in the art and on the statue, it was draped lazily around her shoulders, something perfectly befitting a cat lover like herself.