Did you know Matt Groening has a new show? It's called Disenchanted, and it does for fantasy what Futurama did for sci-fi. In honor of that, let's review this: 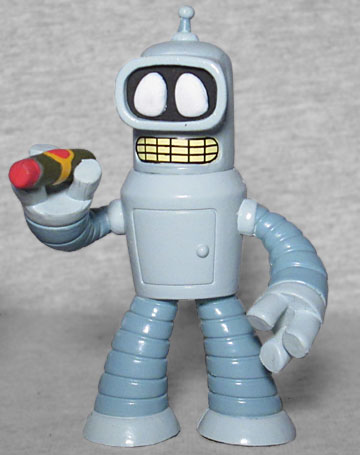 Bender Bending Rodriguez, serial number 2,716,057, is a Model 22 bending unit created by Mom's Friendly Robot Company. He's made from an iron-osmium alloy (with the iron coming from only the luckiest of melted-down horseshoes), and is 40% zinc, 40% titanium, 40% dolomite, 40% chromium, 40% lead, 40% platinum, 40% scrap metal, 40% wires, 60% storage space and 40% empty, with a 0.04% nickel impurity (it's what makes him him). Unfortunately, due to shoddy work by the nameless inspector who approved him when he he was the 1,729th bot off the assembly line, he lacks a backup unit, and therefore can't download his personality and memories into a new body if he dies. He's also the oldest being in the universe, so that might be a big "if."

Bender is part of Science Fiction Mystery Minis Series 2, and other than the fact that the eyes are ovoid, rather than round (and that they lack little square pupils), the line's superdeformed style suits him quite well. He's got his tubular body and limbs, three fingers on each hand, a big digital "smile," his door hatch is sculpted on, and his manly antenna pokes up off the top of his head. He has one foot slightly in front of the other, making the pose more dynamic, and in his right hand he's hoisting a cigar. 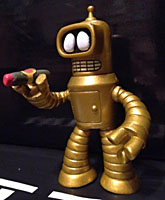 Bender was available in a 1:6 ratio, which would theoretically make him very easy to find, but that was not my experience at the time. There was also a Hot Topic exclusive variation that was a much rarer 1:72. Model 22 Bending Units have two options for their color: fog hat gray, and gold. Bender picked his finish by flipping a coin, but in an alternate reality, he coin came up the other way, so Hot Topic Bender is gold. A very shiny gold, in fact, not just a glorified yellow. 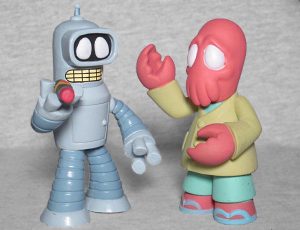