Go inside Mezco's One:12 Collective Batman

We have, in the past, poked fun at Mezco's new Batman figures: they're done in the 6" scale, but they cost $70. That's kind of nuts, especially when we're already feeling the sting of paying $20 for Marvel Legends and whatever Mattel is calling their DC figures this month. Basically, we're cheap and they're not.

But there's no denying that the figure looks cool. It's based on Frank Miller's art for The Dark Knight Returns, and has just the kind of beefy, haggard look that you'd expect from that source - even more than Mattel's DKR toy did! There are even two versions: a black and grey one, as seen in most of the book, but also an exclusive blue and gray version as seen in the first half, when he still had the big yellow circle around his chest symbol. (Though take note: although the images Mezco has sent show the yellow circle, looking at the listing on their site suggests he doesn't actually have it.) 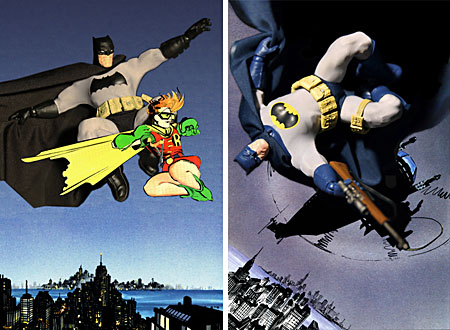 But what do you get for your money? I mean, $65, that's quite a chunk of change, it had probably better be something really good, right? Well, start with the figure itself: it's 6" scale, and has a softgoods costume - basically, the goal for this line is to deliver Sideshow/Hot Toys-style quality in the more popular 6" scale, rather than 12", and that means real clothes. It also means extra bodyparts, because he comes with four sets of hands (fists, grasping, gesturing, and fists with four bat-shuriken clutched between the fingers [which is pretty awesome, you have to admit]) and an extra left boot with a holster strapped to it. Why does it have a holster strapped to it? Because he also comes with a pistol to fit in there. 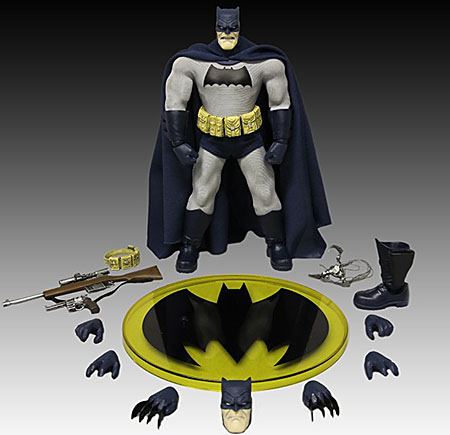 If you get the blue exclusive, you also get a sniper rifle and a second, smaller utility belt to go around his thigh. Both versions come with an alternate head, a grappling hook, and a batsymbol display base, an articulated figure stand to allow you to display him dynamically, and a clip that will let you spread his cape out behind him.

But what's really impressive is the articulation. Look at this "exploded" image Mezco just sent us: 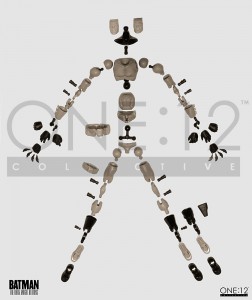 If all those joints move the way they're supposed to, and hold their poses well? That'll be pretty fun.

A six-inch figure that costs nearly $70 sounds like the fever dream of a madman (or a desperate warning sent back in time from the OAFEnet of 2024), but this isn't meant to be compared to Marvel Legends or DCU Classics any more than a Sideshow offering is meant to be compared to those new "Titan Figures" Hasbro is making for all its properties - the scale may be the same, but the intention is much more high-end.

This entry was posted in Mezco, news and tagged Batman. Bookmark the permalink.