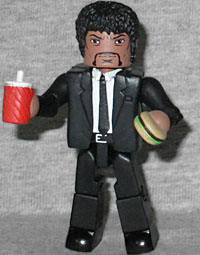 Given to quoting Bible passages before he pulls the trigger, Jules Winnfield is a hit man in the employ of Marsellus Wallace. But a near-death experience inspires him to get out of the business, just as soon as he completes one last job.

Quoting Bible passages? Like hell. He was quoting a Sonny Chiba film. Jules Winnfield is the role that made Samuel L. Jackson famous, so if you like him in any movies at all, you have Pulp Fiction to thank. The Minimate's likeness is good, since they have experience with it, and he gets a new afro to complete the look.

He also gets two new hands: one holding a Big Kahuna burger, 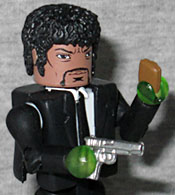 and the other holding a tasty beverage. Yes, the hands are molded with the food and drink attached. It happens. The burger is brown, with a tan bun and a bit of green lettuce. The cup is red with a white lid (since it's full of Sprite), and is sculpted with angled lines all the way around. He also comes with a silver pistol and his wallet, but no plain hands capable of holding them. I guess Art Asylum figures we have enough Nicks Fury to find a pair to give him, but come on: this is Pulp Fiction; it's big enough that for a lot of people, this is going to be their first-ever set of Minimates. 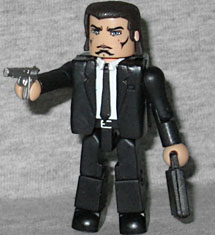 been given the task of keeping Wallace's wife Mia company while he is out of town. Worried about the evening's possibilities, Vince's reality turns out to be far, far worse.

The inclusion of Vincent Vega in this set immediately gives us access to two different comic-movie customs: put the hair on Happy Hogan and you'll have his Iron Man 3 flashback prologue appearance; give this figure Kabuki's hair, and he's ready to fight the Punisher as Howard Saint. The face does look quite a bit like Travolta. Both figures wear the same suit and tie, which seems appropriate. Vinnie also gets a silver gun, but since he has normal hands, he can use it!

Between the two figures in the tray is the mysterious MacGuffin briefcase, and of course, it doesn't open to show you what's inside.