One of the final reveals during the Four Horsemen's Gothitropolis Ravens Kickstarter campaign was also one of the coolest. In addition to all the different colored wing sets to match the different birds, there would also be a final, all-new set of wings: skeletal wings, with an additional skeletal bird interchangeable head. 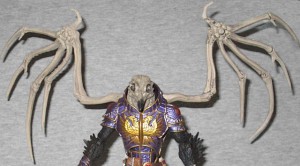 The wings are very well designed, though they clearly aren't modeled after any real bird wings. Bird wings are similar to other vertebrate arms in their basic make up: you have the humerus that connects to the shoulder, then the radius and ulna after the elbow, and then the carpal (the "wrist"). Then things start to get a little different. Birds have far less fingers than most armed vertebrates: typically there's one large "finger" that includes metacarpals and phalanges, and then a smaller finger bone called the "alula" (which means "winglet"). This bone is like a thumb of sorts, a vestigial appendage that can't be used like a typical finger, but can be manipulated during flight to give birds a higher angle of attack, much like slats on an airplane.

Anyway, The bone wings the 4H gave us take some 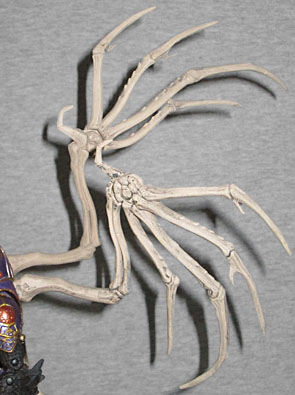 anatomical liberties, in that they have four full length "fingers" which make these wings more like bat-like than avian. There is a little alula at the top though. I'm not complaining; the sculpt on these is very nice, with a sinister appearance and bone-like texture. I'm more than willing to forgive any differences between these and real bird wings, because they simply look bad-ass. As an added bonus, they're much lighter than the feathered wing sets, which means they won't droop like those tend to.

The wings get a beautiful bone-colored paint job, with a nice but moderate wash that really brings out all the pores and pits in the sculpt. They look fantastic. They attach to the backs of your figures via a peg, just like the normal wings, and then they move at a horizontal shoulder hinge, and another vertical hinge at the "wrist." They can't really be fully "folded" like the feather wings, but they have a nice range of motion to them nonetheless.

As previously mentioned, a skull-like head is also included. It's nominally

based on a raven skull, but like the wings there are a lot of liberties taken with the sculpt. Again, I'm not complaining, it looks super cool and creepy. Instead of being entirely clean bone, the neck is actually made up of musculature, tendons, bones and veins. This gives it the appearance of a desiccated, mummified bird rather than just a skeleton. The paint is all bone colored, much like the wings, and a wash helps bring out all the cool details. The tip of the beak and the eye sockets get some darker paint apps to help them standout. 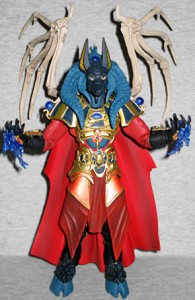 figures, but I personally prefer the wings on the vulture given its association with death. As an added bonus, these wings are also compatible with a previous Gothitropolis offering: Scarabus, and all of his variants! Remove the little insectoid limbs from the back of any Scarabus variant, and the bone wings will plug right in, looking super awesome. Since the only Scarabus figure I own is Anubos, it's a super good fit given that his namesake Anubis also is primarily associated with death.

The bone wing/head set is a really cool add-on, and I almost wish I had gotten a spare Raven figure just so I could have these wings and head as part of my main display without having to sacrifice a bird. You know an accessory set is good when it makes you want to buy an entire extra figure. For me, the Ravens have had their ups and downs, but this set is definitely a high point.