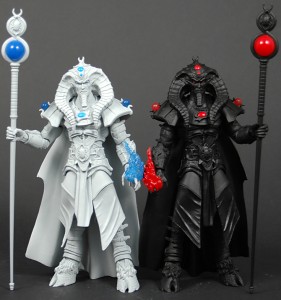 For the last week, we've been reviewing the complete set of Scarabus variants. To make reading them all easier, here's a handy list:

The image at the top of the page here shows Light Talisman Scarabus and Dark Talisman Scarabus - the limited edition figures sold at this February's Toypocalypse event. The figures, limited to 100 pieces each, are solid white and solid black, with plain red or blue accents, as you can see. The Timekeeper armor matches the color of the figure, rather than the flames. If you read the story of these variants, you'll find that they're not meant to actually be Scarabus himself - just representations.

We've also been assigning typically silly "variant names" to all the Scarabii - you know, the kind of names Hasbro or Mattel would give to their repaints. You haven't seen any of those, but why shouldn't you?

If you bought the complete set of figures from Store Horsemen, you also got a free copy of the Four Horsemen print, with art by Nate "Baena" Baertsch: 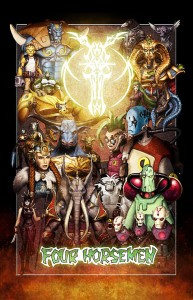 The poster shows the four original properties the Four Horsemen have developed so far: Symbiotech, Gothitropolis, Magma CORPS and Seventh Kingdom. If you really get in there and look at it, too, you can notice some as-yet-unrevealed characters. Nice work, Baena!

This entry was posted in FANtastic Exclusive, lists and tagged Gothitropolis, Seventh Kingdom. Bookmark the permalink.