The Seventh Kingdom gets mapped

Last week we shared the story of the Seventh Kingdom with you, and this week we have a visual representation. Click the image below for a bigger version: 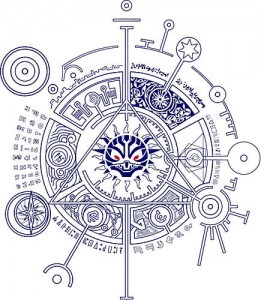 Nice, huh? That's the big crazy graphic that's shown up on the cards behind all the 7K figures so far, and while it does work as just a graphic image, it's also a map of the world.

The image in the center we can recognize as the face of Xemnoss, the Sun God. That would be the titular Seventh Kingdom, formed at the splitting of the world. And immediately to the west (that's the left - at 9:00) we have Animynthus, the Animal Kingdom. We can tell because that symbol is the same that showed up on the flags of the Mynothecean Six.

Continuing clockwise, we next have the orderly Machine Kingdom, the wild Mutant Kingdom, the airy Elemental Kingdom, the intertwined Human Kingdom and finally the Alien Kingdom. Only time will what the other kingdoms are named (or what the other symbols on the map mean), but at least now we know where they all are in relation to one another.