In today's review of the Seventh Kingdom: Ramathorr figure, yo mentioned that the elephant's weapon was chosen in Round Five of the FANtastic Exclusive voting. That's great and all, but what were the other choices? 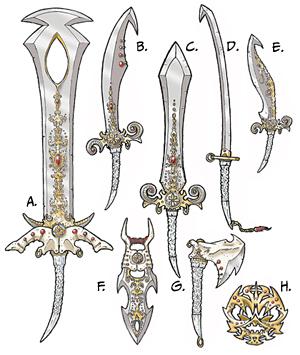 Okay, so A is the Buster Sword, obviously, the one that we got.

Now, the sizes are approximate, based on what sort of weapon each is - when the Horsemen showed them off, all the images were the same size, which defeated any sense of scale. As you can see, they almost all had the "ivory tusk hilt" thing going on, so who knows why the Buster Sword had more than twice as many votes as the 2 finisher, the Battle Axe.

Honestly, considering Ramathorr's Indian influences, the scimitar, khukuri, chakram or katar would have been the most appropriate choices: and how cool would it have been to see him holding the katar (a punching dagger) with his trunk? The Buster Sword is just lame.

This entry was posted in addendums, FANtastic Exclusive, lists and tagged Seventh Kingdom. Bookmark the permalink.