We've talked a lot about the Seventh Kingdom and everything related to it, but there's one are we haven't looked at yet - specifically, the back of the card. 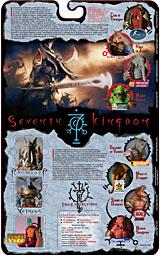 Nice stuff, huh? Bio paragraph, pictures of all the figures, all that. But what about the big artsy picture of Ramathorr? What's that all about? 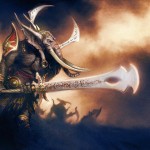 Nice, isn't it? You can click that thumbnail on the side, there, to see a bigger version of it. We get Rammy front and center, wielding his big ol' Buster Sword, but you'll notice that behind him in the shadows are the rhino, hippo and one of the elephant soldiers, but also Xetheus and a Minotaur Soldier, too. The gang's all here! It's beautiful work, isn't it? 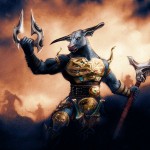 The art was done by a fellow named Nate Baertsch, who hangs out on the FANtastic Exclusive message boards as "Baena." You can imagine what a big thrill it was for him to do the artwork. Or heck, you can follow the link to his page and read about it for yourself. The thumbnail to the right, here, is a similar piece the Horsemen commissioned featuring Xetheus and the cows.

Now, since we'd seen Xee in the back of the first image, you might expect we'd be able to see Rammy in the back of this second one - you know, like two perspectives on the same scene. But no. Instead, Baena decided to have the two tile together to form a huge image. That meant the original needed to be retouched a little, but they sure do look good together don't they?

Keep up the good work, Nate! And here's hoping you get to do some more Seventh Kingdom artwork soon!

Baena was back for the first year of the Seventh Kingdom's standalone series, doing a painting of Queen Alluxandra and her united guard: 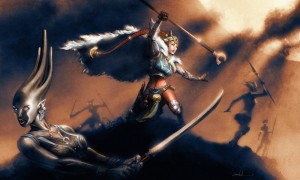