Happy 2015! Let's see if we can't get this ol' Spoils of the Week back up to something more akin to weekly postings (rather than quarterly). Rest assured though, my most appreciate-ably patient readers, that though I was not Spoilsing I was still, sure as hell, a'shopping! That means there is about 3 months worth of purchases to catch up (not to mention even more SDCC 2014 stuff, too)! So, in order to make it a bit more manageable I think I'll be tackling in themed chunks - up first... Marvel! 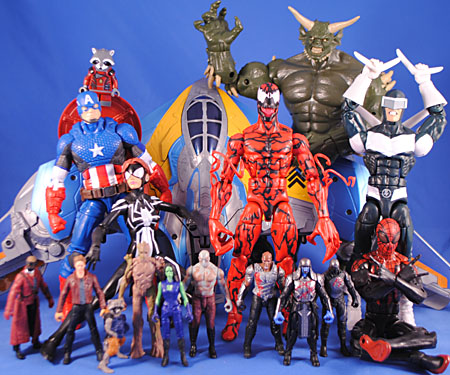 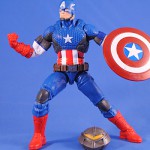 In December-ish Toys R Us did a nice, big "buy one, get one" sale on all Marvel figures, so I decided to take full advantage of that on a brief stint off from work. I had scored Black Widow will traveling so that meant all I needed was this figure's BAF Head to complete my Mandroid so on to the list went this Yet Another Captain America. He's actually not that bad, and more enjoyable in-hand than I'd imagined. The sculpt is nice and detailed, the colors bright and vibrant. Some of the articulation is a little limited due to the sculpt and his right knee is bowlegged thanks to the packaging. The Mandroid head is tiny and none-too-impressive on it's own but at least I have a properly colored shield to donate to my Stealth Cap now. As far as "filler figures" go, this one ain't too bad. 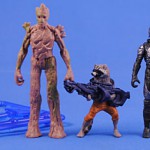 I really hate this new 2.5" scale. It's just an excuse to be lazy and make sub-par product... but it's the only way to get a Korath toy and it has the largest "cast" in a common scale/style... so here we are. All are fine for what they are. The closest thing to a highlight here is that the giant missile launcher looks reasonably screen accurate to a Sakaaran rifle. But, since it's about twice as heavy as the cheap-ass figure there's no way to have him reasonable hold it. 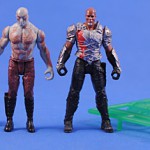 I really dig Djimon Honsou so I'm tickled to get a figure of him, even if his character was totally pointless and horribly under-used in the film. Each of these two-packs come with a missile launcher too big and heavy for the figures to reasonably use (though they allegedly plug into the various vehicles) and a ragingly useless tray of translucent... accessories. They're unintelligible fins, half-weapons and missiles. All too big for the figures even if they were the recognizable/signature weapons of the characters... which they aren't. 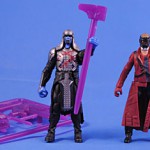 Here we get the signature villain from the Guardians movie so I'm quite happy to get him since Hasbro felt a generic Iron Man was more important than a bad guy for the Legends line. He also, uniquely, comes with his signature weapon, the hammer, in the tray of accessories which is great (though it is, of course, trans-purple, a bit too thick for his hand and leaves him front-heavy). Starlord comes in the annoying style-guide-mandated trenchcoat. What's particularly annoying about him is that the "skirt'\" is an unglued, separate piece that's held in by a simple peg/lazy design/moderate intentions. 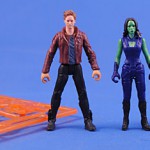 Hey, hey - short-coat Star-Lord! At last, a toy of him as he actually appears in 85% of the movie! A nice touch is that the plastic is sooo soft the heads pop-off easily so one can head-swap easily between the two Quills. Gamora is fine. All bitching aside, the sculpts are actually pretty good considering the small size. The problem is the crappy paint QC and the incredibly soft plastic. There is a fifth set I didn't nab since it's just a repaint of Groot with Rocket and a Nova Corpsman, both identical to the vehicle versions, which is a bummer - had they packed the Nova Corpsman with a Sakaaran Trooper my battle-builder sense would have kicked in and despite my hatred of the line I would have gotten 4+ of those... Maybe they'll do something like that for the Avengers 2 line. 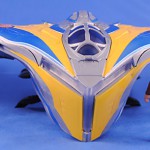 I got this mainly because it was on sale, to complete the set and to have the Milano somewhere in the collection, but damn it's annoying... apparently there is a light-up/sound feature but I really couldn't care enough to waste the batteries to even try it out; especially since Hasbro equally couldn't be bothered to give more than a single poop about this toy. The paint QC is pretty poor, but more outrageous is that a lot of the coloring comes from stickers we have to apply ourselves and the stickers in no way match the sculpt of the ship! So they go over grooves, ridges, etc., which also makes it tough to figure where they go. The abject cost-savings on this entire line is just plain offensive. But here I am buying it anyway... they really should have dropped the light/sound feature here and spent that money on paint. Oh, and the cockpit hatch is a real pain-in-the-ass to close properly as well. 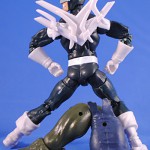 Firstly, how dumb is it that nowhere on the package is this character's name!? Secondly... seriously, boomerangs... how funny is it that both Marvel and DC have boomerang based/themed/named villains that are second or third tier (though I suppose that will change for DC with the Suicide Squad movie [which probably means this is the last we'll ever see of the Marvel character so ultimately I'm fairly glad they made a Legends figure of him, then!]). The figure is just as generic as the character but he comes with four boomerangs, which is pretty cool. Two are a little smaller so there is even a bit of variety and all four fit into his removable backpackerang. Really, this is just a figure to get for the BAF piece (Ultimate Green Goblin's left leg) but at least this guy is vaguely recognizable/novel to me as opposed to his "variant," Beetle, for whom I have an odd ignorance of and hatred for (oh, apparently it's the "Ultimate" version... weird). 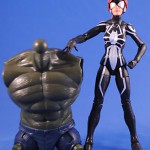 So apparently this is Spider-"girl"...? I'm certainly not sure since the package refuses to give the characters a name - seriously, the brief generi-text on the back couldn't just read "Black Cat & Spider-Girl help Spider-man"!? I think I would have preferred getting Black Cat but beggers can't be choosers and since I got this lady on sale I'm yet a happy camper. I dig the costume and the separate-sculpt red hair is a nice touch than helps makes this figure "more than." She's a "must-have" for the Goblin's torso BAF piece but I think she's neat enough looking to warrant ownership of as well. 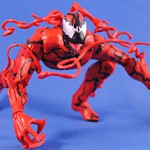 YEEEESSSSS!!! Scored this guy not only at a Walgreens (back in September) but for $15 as well, so hells yeaaaaah!!! This figure was/is impossible to find and for good reason - he's the Carnage figure we/I have been waiting 20 years for! Sure a fully unique sculpt would have been nice but he looks more like Carnage than any figure before or after (sorry DST)! The key is the vibrant red coloring - so often Carnage figures end up looking like black plastic with a red wash but this guy... he is a beautiful red with crisp black googlies printed on him. More over... the head sculpt is immaculate. Add to this a wonderful range of motion from all his articulation and you get a figure easily in my Top Ten for 2014! The only thing I'm not totally crazy about is his back-tendrils, which seem to get in the way a bit too much for me; but all in, considering this is a Hasbro product, it is effectively flawless! I just wish he was more readily available so that I could snag a second one for more posing fun! 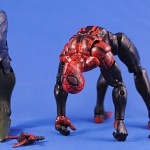 This hurt. A garbage du jour design that will only be remembered because it got a toy (what's up Big Time Spidey). At least he comes with alternate hands to help trick your mind into thinking this wasn't a waste of $15-$25. He comes with the BAF's right leg, so I just chose to be the sucker and buy him to complete the Goblin. 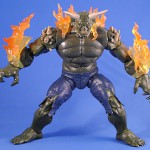 I really, really hate that the 6" Avengers movie figures were Walmart exclusives and thus unfindable for me, especially since the Hulk was so great in the movie and the figure turned out so awesome, but at least I "sort of" get it now through this BAF figure. Fortunately I'd gotten Amazing Spider-Man 2 Spidey & Electro previously so the arms were already, ahem, "on hand." The figure is really a big hulk of a beast and a surprising amount of fun, especially with the translucent fire bits added on. It's a shame we don't have a proper Ultimate Spider-Man Spidey, but I guess he's like 98% identical to normal Spider-Man so any figure would work. This is absolutely one of those figures that is so much cooler open, assembled and in-hand than in photos, etc. The only real bummer is that the neck is just a ball-in-socket joint. Were the neck-ball on a hinge-disk this guy would effectively be perfect. Ultimately (no pun) I'm glad I bit the bullet and completed the set so that I could have the full figure - he's rockin'! 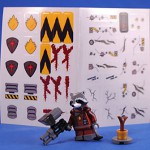 Toys R Us carried this simple little polybag that delivers us the "Ravager" uniform Rocket minifig previously only available in the impossible to get SDCC set. It's super annoying that the polybag is basically just a figure, but at least they tossed in a couple bones to take the sting off. He has a fun little gun build and a novel "baby Groot." An interesting new twist is the inclusion of a sticker sheet and set of instructions for plussing up the Milano set and/or other Guardians sets. I generally hate stickers, and I don't have those sets, so this does precious little for me - but it's the thought that counts. Overall this is generally a cute little set, expect for one glaring issue... his tail, which is piece that fits between the legs and torso (rather than the neck like the Chima Fox & Skunk) and it is too long for the short-legs Rocket has... so he can't stand. Great!

This entry was posted in Hasbro, Lego, Marvel, Rustin's Spoils of the Week and tagged Captain America, Guardians of the Galaxy, Marvel Legends, Spider-Man. Bookmark the permalink.