All the early Xevoz toys came with some mysterious accessory that didn't seem to be anything. It was basically just a little handle that served no purpose. Ah, but it did serve a purpose, just not one that any of us knew.

In February of 2004, Hasbro put out a press release hyping Xevoz. This press release had a little bit of background info that was never seen anywhere else:

A compelling story about a small but formidable fighting force known as The Xevolvers - the last hope of a planet plunged into chaos by a powerful technology. Long ago, the Ancients of XEVOZ learned to manipulate their genetic makeup at will with a device called the Evolutionary Accelerator (EV-AC). The EV-AC could change them physically, turning their limbs into tools and weapons of steel, stone, fire and even ice. One of the Ancients - the evil Genok - overthrew the rest and appointed himself ruler. The remaining Ancients formed The Xevolvers to stop Genok and imprison him in a secret impenetrable tomb for eternity. Or so they thought...

And then, here's a picture from the official Xevoz story bible: 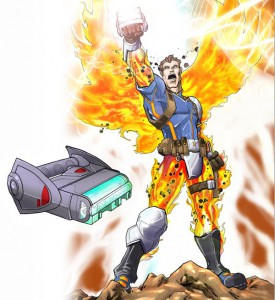 That's a Xevolver using his Ev-Ac! So basically, the "mystery handle" is an accessory that was cut from the backstory at some point, but late enough in the game that the earliest releases still came with one.

This entry was posted in Hasbro and tagged Xevoz. Bookmark the permalink.