Another year, another Xevoz toy that we'll never own! Hooray! 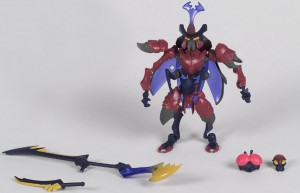 Now this is interesting! This figure, a Sectoid named Scarabushi, was revealed by designer Ben Hitmar, same as Warlock and Mech Shell - but this one wasn't included on that big chart, so you'd think he might have been a late creation, but look: he's been around long enough that he even got to the test shot stage! 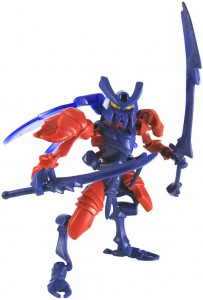 A mix between a scarab beetle and a samurai, Scarabushi would have had a wonderful burgundy and indigo colorscheme, a big awesome spear, a hooked sword, and alternate heads of a fly and... an ant? All those translucent pieces look great, too. What a loss!