Oi! It's been ages since eMummy shared any of his custom Xevoz design, but he's back at last - this time with a new species! 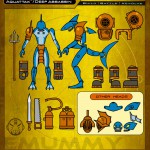 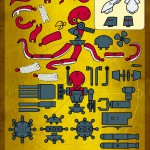 These fishy blokes are both part of a group called the Aquattax, something eMummy just made up. Is that fair game, or did he cheat by expanding the world beyond the borders it already had?

You may recognize Deep Assassin, as we've seen him before. He's been vastly updated though, with different options to turn him into a gladiator or a BioShock-style deep diver. Would that helmet really fit over the head, though? Nice work on the choices to turn him into a hammerhead or a piranha, though.

The Depth Kraken would be a MONSTER of a set! Look at all those pieces! He can be an octopus or a squid or a robot submarine. And how funny is it that his "comedy" piece (his second bill) is the quill from a pen? Because ink! It's funny!

At the outset, the Xevoz designers said that they had plans for 12 species, not just the six (and then eight) introduced at the beginning. While that plan may have changed even before the line was cancelled, they've also said that one of the future species they planned to intro would have been aquatic in nature, so I don't much mind seeing eMummy unofficially introduce that concept here.