Hello again, dear readers. I don't know who this is! 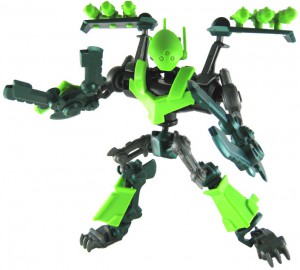 We know there were plans for at least two more Biomecha in the future of Xevoz: a Sledge Trooper 2.0, and something called a Machete Mech. This toy uses a lot of the existing Sledge Trooper parts, which points to it being the former. He's got big claws, which appear to be articulated, and the missiles on his shoulders would have been removable. The new legs look pretty frightening, don't they? That's some terrific armor on them, too. There's no concept art of this character, no packaging, nothing but this prototype test shot. I wonder what colors the final figure would have been?

It's been a fun run, but this brings us to the end of our look at Xevoz Series 5. I've given the once-over to all the info that has been publicly released about these figures, and they just make me sad for the line that might have been. Why didn't more people buy these!!!