Look at this, you!

Some jolly cracker by the name of "hawflakes" has shared some custom Xevoz designs he made, focusing on species that were under-represented, filling in the gaps in the line, and also on pieces that would be great for kitbashing. He began with the Sectoids, since there were only two of them ever made. 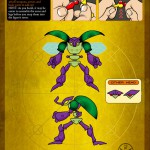 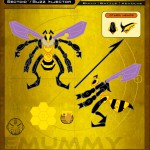 The beetle-y Doom Dozer is nice enough, but feels a bit plain. That Buzz Injector, though? With his big stripey butt and his alternate EEVIIL hornet head? I'd buy an entire hive of those! I love that his spear looks like a bee's stinger, and that his weapons include a honeycomb shield and a pot of hunny. These should have been real toys!