Today's batch of custom Xevoz designs ups the ranks of the Sectoids and the Reptosaurs, two woefully under-represented races in the line. 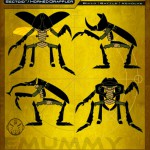 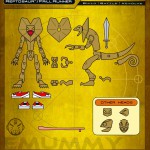 The Horned Grappler is a lot like my beloved Bone-Cutter toy: he's very much like a real bug, but given enough of a Xevoz twist to make him interesting. That you can create two different beetles from his pieces means it's probably very good that this wasn't a real kit: I would have had to buy AN ARMY of them to swarm all over my tables and shelves.

On the other hand, the Frill Runner really needs some more accessories. Being able to make him a frill-necked lizard OR a chameleon is nice, and the shoes are funny, but it's not enough. He needs some armor/clothes, or more weapons than just a sword. How about some bits that play off the chameleon idea, like a shield and staff that look like a palette and brush?

And here are two more! 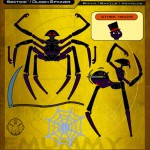 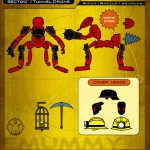 The super-thin legs on Gloom Spinner just don't look like they fit the Xevoz style. The black and purple is a nice combo though, and the alternate top hat head is funny. There's no way a missile launcher feature would fit in that abdomen, though.

The comedy parts on the Tunnel Drone are perfect! A canary in a cage, and a lighted helmet? Laughter! Laughter aplenty! The "army ant" head is no slouch, either. Not crazy about the bent upper legs, and again, you couldn't fit a wind-up feature in a butt that small, but even as a static piece the drill would have been a nice touch.