It's back to the simple packs for eMummy this time! 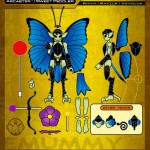 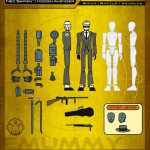 The Sweet Peddler looks like something that would appear in a Guillermo del Toro movie. Since she's an Arcaster, he's given her a flat "blasting" palm, but no cape this time. I guess her wings fill the role. The lollipop weapon is a nice touch, but she could use more candy-themed accessories to live up to her name.

Not sure what the point of giving the invisible man robot arms is, but Hidden Avenger is still a rather enticing looking fig. Maybe it's the ability to make him a 1920s Gangster Robot that does it? If that's the case, give him some alternate feet that look like cement shoes!