After the massive flood last time, today we just have one Meta Beast, the Savannah Lord. 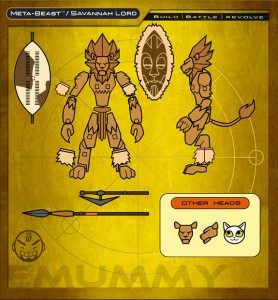 Originally called Solar King, this lion is plain, but it works for him. His mask looks like it plug into his chest similar to Thunder Shaman, and his "grass skirt" armor feels familiar, too. The weaponry is perfectly faux-African, particularly the shield and the spear. Including a female head (aka, the one without a mane) is a nice touch, but it's sad that his only "comedy" bodypart is the little kitty cat head. He should have like a whip and a chair or something, like a circus ringmaster.