Protectors of the island of Yamatai in the Dragon's Triangle, the Storm Guard serve Himiko, the eternal Sun Queen, in whichever host body she is currently inhabiting. They take their name from their mistress, who was believed to control the weather and used her powers to unite the islands of Japan. 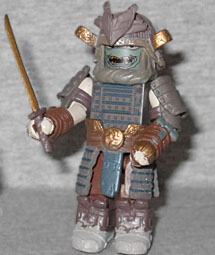 The Stormguard (yes, it's spelt as one word, not two) is one of two enemy factions in the game, though they're at war with the other bad guys, too. They're basically undead samurai, so this Minimate has some very complex samurai armor pieces: a helmet, spaulders, gloves, a skirt and boots. It's really nice stuff - even Rustin, who usually hates sculpted Minimate pieces, approves of it. The colors are muted earthtones, and there's a bit of glitter over everything, to make him look more mystical. He's armed with a golden sword. I do wish he had a nose: I know Minimates don't typically get noses, but the Stormguard is wearing a mask, not just showing his face; a (3D) nose on a mask is no more out of place than 3D flaps on a helmet. 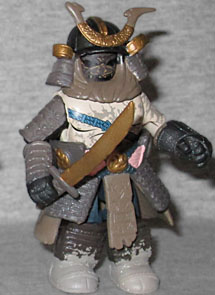 The Stormguard Stalker is an elite boss, presumably the one in command of all the more generic guards. You can tell this Minimate is based on early designs, because the one in the game has armor everywhere except his back, while this toy has a bare chest and left arm. That does mean you can enjoy his decaying skin, though! He's done in earthtones and glitter, like his little buddy, but has a ton of add-on pieces to make him bigger and badder. He's also armed with a giant sword, rather than the oni-sized club he actually uses in the game. Do be careful, though: the crest on his helmet is a separate piece, and can fall off easily.