A former Royal Marine, Roth served as guide and bodyguard 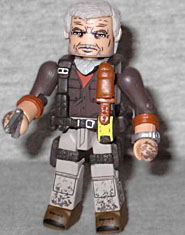 to Richard Croft on many expeditions. Now the owner of the ship Endurance, he and his crew (including Croft's daughter Lara) are headed for the Dragon's Triangle.

Conrad Roth is Lara's treasure-hunting mentor in the Tomb Raider reboot, but since her origin always involves her being orphaned and alone, his odds aren't very good. He's a grizzled, middle-aged man, basically a palette swap of Sully from Uncharted. He's a brown shirt and khakis, and has new webgear that includes a white scarf around his neck. His hands, feet, and shins are muddy. He's armed with a pistol and a knife - the knife fits in a sheath on his chest, but he'll just have to hold the gun. 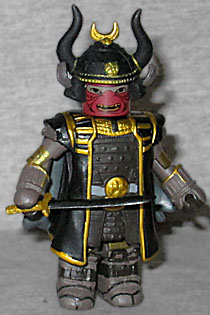 Long ago, the island of Yamatai was the home of the Sun Queen, and her Storm Guard kept order among the warring islands. Centuries after his death, the General still leads her army in defense of Yamatai.

Not exactly, no - this figure's design is based on concept art rather than the final game, so maybe that biography is based on early story ideas, as well. The Stormguard General is not quite as ornate as the regular Stormguard or Stalker, but he does still get a massive horned helmet, molded boots and gloves, and a full-body robe. His colorscheme is black and gold, and he's wearing a red mask - sadly, no skeletal face. He comes with a black-bladed katana that has a gold hilt.

All the Minimates share the same body with different paint decos, and they all move at the same 14 points: neck, waist, shoulders, elbows, wrists, hips, knees and ankles. That's a heckuva lot of motion for something so tiny. The Tomb Raider Minimates also come with clear disc bases, but the pegs are too big to fit in their feet very easily. Because of a packing error, my Stormguard General came with two bases.