This is the latest in a series (of indefinite length and regularity) of blog posts memorializing cancelled toys. Today, in honor of our review of the Tomb Raider Jungle Adventure Diorama, we'll be taking a look at the line's planned third series of figures.

First up, we would have have this set featuring Lara and a creepy alien in Area 51: 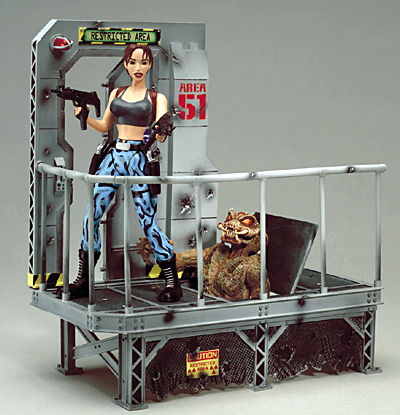 Based on a level in Tomb Raider 3, this would have included a really cool catwalk with blast marks and warning signs. The alien would have only been a half-creature, rather than a full one (same way the Yeti was done), and it looks like the door in the back would have been able to slide shut.

That one made it as far as press photos, but the other set - a mountain shack - was only ever seen at Toy Fair. 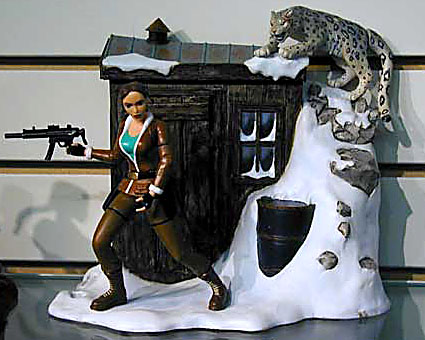 The snow on this one burying an oil drum and piling in the windows is done really well, especially the way the rocks are poking through. The snow leopard never would have been able to stand up off the base, which would be a shame. There was also a version that showed Lara wearing camo pants: 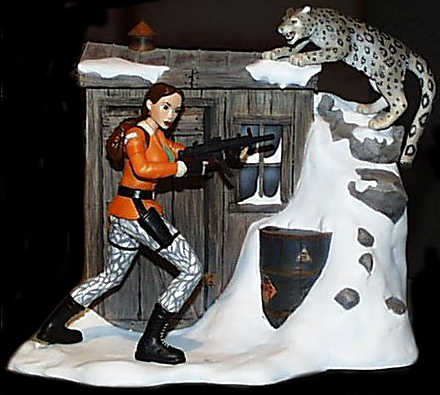 Sadly, it seems the interest just wasn't there. While the Series 2 sets at one point seemed to have been cancelled, they did come out in very limited numbers - but Series 3 remained purely theoretical.

This entry was posted in addendums, cancelled toys, Playmates and tagged Tomb Raider. Bookmark the permalink.