The Scavengers were brought to Yamatai by the fierce storms of the Dragon's Triangle. Organized into a cult called the Solarii Brotherhood by Father Mathias, they worship the Sun Queen, and have built a city from the wreckage of the many plane crashes and shipwrecks that litter the island.

It's hard to tell whether the Solarii Scavenger is based on something that actually appeared in the game, or if it just came from concept art - it doesn't 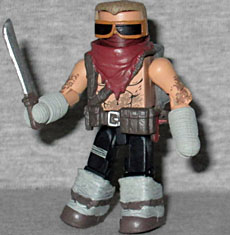 match the "Scavenger" multiplayer skin, but the guys in the game wore so many different kinds of cobbled-together outfits that it's entirely possible this specific combination runs past Lara at some point.

He's wearing wraps all the way over his hands and forearms, and also covering his lower legs. He's shirtless, but really muddy, and is wearing a unique chest cap that has a backpack, bandana, and belt. He's armed with a machete that fits in a loop on his left hip, and is wearing goggles that are molded as part of the same piece as his hair. If you choose to remove the piece, he still has a bandana painted around his mouth, and eyes behind his goggles.

The Scavenger Archer is dressed appropriately for an island where there are constant violent, unpredictable storms. He's got on a padded vest (though in the actual renders it's just a hoodie sweatshirt with the arms cut off) and forearm wraps, blue pants, more wraps around the shins, and a blue cape/hood combo.

The hood thing is removable, allowing you to see that he's wearing 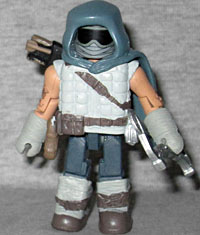 a ski mask beneath it. He also has a fully detailed chest under his coat, but that's kind of boring. His chest cap has a bedroll and a quiver molded on the back. The quiver actually works, a little - he comes with three arrows, but thanks to the design, only one of them can fit inside at a time. He's got a silver compound bow, but because of the bulkiness of his glove, he can't hold it very well.

All the Minimates share the same body with different paint decos, and they all move at the same 14 points: neck, waist, shoulders, elbows, wrists, hips, knees and ankles. That's a heckuva lot of motion for something so tiny. The Tomb Raider Minimates also come with clear disc bases, but the pegs are too big to fit in their feet.