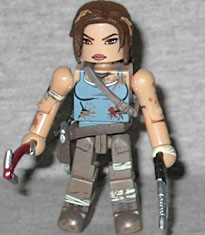 When her ship, the Endurance, ran aground, Lara was captured by the island's mysterious inhabitants. Injured while escaping, she set out to rescue her friend Samantha from their hands by any means necessary.

When the 2013 Tomb Raider reboot was announced, some people said the game was over-sexualizing teenage Lara because she was heard breathing heavily. Because, you know, it's fine for her to get beat all to hell and struggle just like any other videogame hero, but heaven forbid she get out of breath. 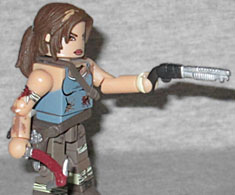 This Lara is differentiated from the normal version by the inclusion of mud, blood, and painted bandages. Plus, she's got a more stern, self-confident look on her face. She's also collected a better arsenal since she started, because the toy comes with a real climbing axe, a shotgun, a rifle, and a pistol. The pistol fits in her new holster, while the larger guns have a hole on one side so they can plug onto the strap around her chest.

With their heavy body armor and makeshift riot shields, 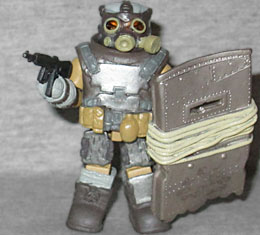 the armored Scavengers are unstoppable warriors. In order to get past them to reach Samantha, Lara must first find a vulnerable spot to attack.

Nothing more annoying than an a-hole enemy who's immune to all attacks. This one has new boots and gloves with piecemeal armor, plus a massive vest and a gas mask. He gets the same kind of rifle as Lara, but hides behind a shield that looks like it's made from leftover aircraft or boat parts. Because it probably is. If there's one thing Lian Yu Yamatai has in abundance, it's wreckage.

You can remove his mask and vest, and he's fully detailed beneath. The head is actually designed to look like the headgear he'd be wearing behind the mask. The mask itself is molded from a semi-transparent plastic, so we can almost see his eyes through the unpainted lenses. His shirt is brown, and apparently buttons up the front.

All the Minimates share the same body with different paint decos, and they all move at the same 14 points: neck, waist, shoulders, elbows, wrists, hips, knees and ankles. That's a heckuva lot of motion for something so tiny. The Tomb Raider Minimates also come with clear disc bases, but the peg is too big to fit in the Armored Scavenger's boot.