After crash-landing offshore in 1982, Mathias discovered the lost kingdom 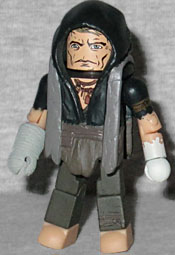 of Yamatai, and learned of the power of the Sun Queen, Himiko. He formed the Solarii Brotherhood to worship her, while he secretly sought a way home.

Father Mathias certainly looks like an ascetic hermit. He's dressed like a hobo Obi-Wan. Hobi-Wan. He's barefoot, and wearing all shades of brown. He's got a big hood, and what's supposed to be a priestly shawl, but the toy weirdly interprets as two strips of cloth dangling from his shoulders. Uh... yeah. You can remove the entire hood/cloak combo, revealing his hair, but there's not much point. You can already see his necklaces. The Minimate has a glove that appears to be a cast on his right arm; it's supposed to be chalky white powder with a wire or something wrapped around his forearm. This is... not a perfect execution of it. 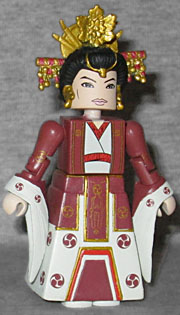 The spirit of the Sun Queen was passed from one generation to the next through a line of host bodies. While there has not been a Sun Queen in centuries, the power in Himiko's tomb still causes storms in the Dragon's Triangle.

This is one crazy-ornate figure! She's got a big new skirt and long flowing sleeves, and of course there's the massive golden headdress/crown dealie. But more than that, all the pieces have complex paint apps all the way around, which is even more expensive than sculpting things. Her dress is covered with mitsudomoe symbols, done in red on the white sections and gold on the red sections. There are tons of fine golden details poking out from her dark black hair, and a few red apps on the dangly bits of her crown. Unfortunately, she has a perfectly beautiful face, not the creepy decaying look she had in the game.

Actually, at one point there were plans to do a second Himiko, this one looking more decayed. She would have been purple and cobwebby and have a skull for a face. Basically, it would have given them an excuse to get some more mileage out of these molds, but sadly, Series 2 never came to be.

All the Minimates share the same body with different paint decos, and they all move at the same 14 points: neck, waist, shoulders, elbows, wrists, hips, knees and ankles. That's a heckuva lot of motion for something so tiny. Himiko's dress blocks her legs slightly, but there's no way around that.