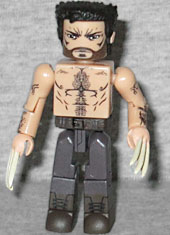 During World War II, Wolverine was caught within the blast radius of an atomic bomb while a prisoner of the Japanese Army. He saved a young soldier named Yashida by shielding the man with his own body.

If this Wolverine (#47) is, as the bio suggests, meant to be taken from his time as a POW in Nagasaki, why does he have metal claws? Yes, the set includes a "bone" set (not the actual bone claw sculpt, but the regular claws painted yellow instead of silver) and plain hands, but why include metal ones at all? He's topless, ladies, and his pants are a lovely shade of "flashback brown." 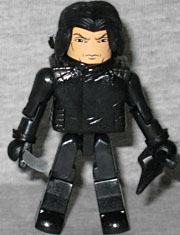 The illegitimate son of crime boss Shingen Yashida, Kenuichio Harada is the half-brother of Mariko Yashida, and a member of the deadly Hand ninja clan.

We maintain a list of actors who have been in more than one comic movie, but Harada is an extra special case, in that his actor has played the same basic role in two unrelated films: he's the leader of the Hand in The Wolverine, and he was the leader of the Hand in Elektra! (Also, how awesome is it that Minimates don't have to play the "separate rights" game that the studios do?)

Harada is wearing a cool new jacket that has his quiver attached to the shoulder, and is armed with a katana and his bow and arrows (yes, both arrows fit in the quiver). The Will Yun Lee likeness is only so-so, but he does get a new hair piece designed to fit over his collar, or you could replace his head with the included masked version.