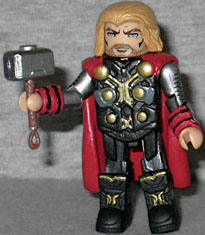 The Prince of Asgard, Thor possesses the power to summon storms with his magical hammer, Mjolnir. It is also enchanted so that only those who are truly worthy may left it.

Thor 2 kept the same complicated design aesthetic as the first one, but the Minimate stepped things up a notch. While the previous movie Thors had fancy chest designs that combined molded and painted pieces, this is a fully molded piece. Rather disappointing. His bracers and boots are done nicely, and the armor on his arms and legs is painted nicely. His hair is a new piece with a braid in the back. 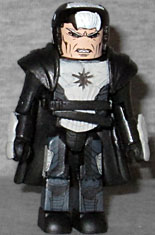 Malekith is the leader of the last band of Dark Elves in the universe, having returned from a mission beyond the Nine Realms to find his world devastated, and the source of the Elves' Dark Energy missing.

There was no Malekith figure in the Thor 2 toyline, but hey, Minimates to the rescue! The body of the figure is done really well. His cape and chest armor are one big piece, but there are cut-outs that allow the painted details onthe chest to show through. That's what we like! The leg details are just painted on, but the armor on his forearms is molded as part of the hands.

The figure comes with two heads, but neither of them looks very much like Christopher Eccleston - it's a very generic face. Also, it's a very pink face, not the pale color seen in the film. The alternate head has the half-blackened face, though it's more comprehensive than the movie makeup. He's got a cap with his braided white hair and his strappy black hat.