Jackie-Boy was making trouble, harassing the girls who work the streets of Old Town. Gail, the girls' leader, didn't like that, so she had her sword-wielding enforcer Miho take him out. Problem is, Jackie-Boy was a Basin City cop. Now it's up to Gail's old friend Dwight to help clean up the girls' mess, or Old Town will become a war zone. 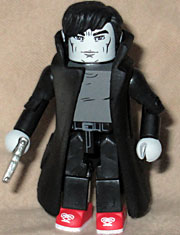 Since there were no Minimates for King Arthur or Shoot 'Em Up, this is our first Clive Owen figure. He plays Dwight, after the magic plastic surgery changed him from looking like Josh Brolin. He's wearing his trenchcoat, with one lapel flapped over against his grey T-shirt in the breeze, and his sneakers are bright red - the only spot of color in the set, which is true to the comics. The likeness is good, accounting for the difference between Clive Owen's head and a Minimate's, and he's got floppy hair. Naturally, the set has a gun for him to use. 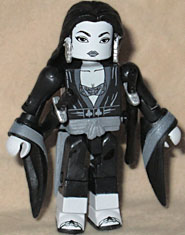 Being that Frank Miller is the guy who introduced ninjas to Daredevil and Wolverine, it's no surprise that his Japanophile tendencies would come through in his creator-owned work. Thus, deadly little Miho. This is the Devon Aoki version, not Jamie Chung, and it definitely looks like her. She gets a new hair piece, with her fancy earrings attached. Her outfit is detailed nicely, with a complicated tampo for her chest and her shoes. She has big sleeves, and a new belt that has holes on the sides where the scabbards for her swords can plug in. Plus, the tails of the sash have sculpted-in details! 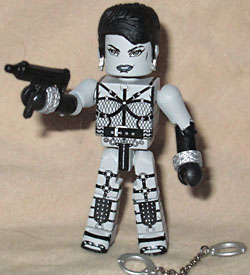 The outfit that Rosario Dawson had to wear as Gail was utterly ridiculous - basically just a pile of belts - but it's painted well here. Using 3D pieces would have made it too clunky, but thankfully the paint continues all the way around the body, rather than stopping at the sides. Her spiky hair, in Minimate form, has become more of a bouffant or beehive. She does have 3D sculpted bracelets; they're silver here, but seem to have been black in the movie; this makes a better contrast, though, so it's a fine choice. She's armed with an Uzi, which is both accurate to the character and a new mold. There's also a pair of handcuffs in the tray, which probably belong to her. The NECA version had a pair, so why not the Minimate? 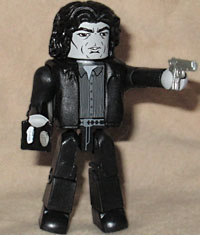 Jackie-Boy is your typical self-centered asshole. If he were more of a wimp and didn't have the power of his police badge, he'd be in MRA chatrooms complaining about how he got friendzoned (before steering the conversation toward ethics in videogame journalism). Benicio Del Toro wore prosthetics to play the creep, but since it was mostly his nose and chin, we don't see much of it. He's got shaggy hair, and is wearing plain clothes.

He's armed with a pistol and has an extra badge hand, plus a second head: this one is smiling, and has white blood on the forehead; it's also got a new hairpiece that includes the gun barrel sticking out of his forehead, which is just a fun extra to include.

These Sin City Minimates four-packs are great. In one shot, you get all the major characters from a story arc, without having to worry whether the set will ever get completed. There could totally be a supplemental two-pack (we suggest Manute and Becky with a taped mouth Jackie-Boy head, allowing them to reuse that "forehead gun" mold), but even if that doesn't happen, The Big Fat Kill has been nicely represented.