Funko has announced a second series of Horror Classics Mystery Minis - let's hope they're produced in larger numbers than Series 1! 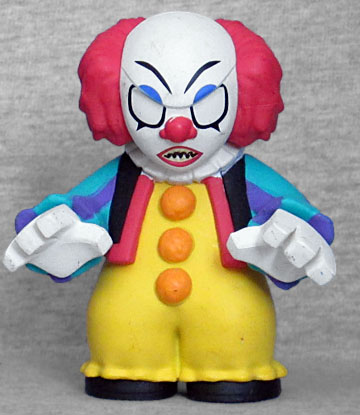 While It can take the form of anything someone fears most, her (yes, It is a "her" - she lays eggs) most common form is Pennywise the Dancing Clown. And why wouldn't it be? The only people who like clowns are other clowns - a 2008 study showed that the excessive makeup they wear frightens rather than soothes children, possibly because the combination of pale skin, large eyes, and a permanent grin are reminiscent of a corpse (which is exactly what our brains developed the uncanny valley effect to keep us away from). Pennywise wears a baggy yellow suit with orange pom-poms on the front, a black vest with red trim, and purple-and-teal striped sleeves. His (yes, Pennywise is a "his" - that's Tim Curry under the makeup) poofy red hair exposes a bald head, there's blue on the eyelids, and his open mouth reveals fangs. He's also the first Mystery Mini to have a nose! 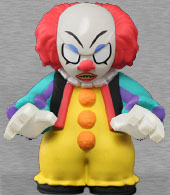 The normal Pennywise (whose name comes from the British idiom) is available in a 2:24 ratio, making him one of the most common figures in the series. But if you're the luckiest emeffer in the entire universe, you could get the 1:144 glow-in-the-dark variant. It really does work very nicely in this case - the pale, waxy finish of the GitD plastic replaces the white of his face and hands, so it doesn't look particularly unusual when the lights are on. But when it's dark - say, the way it would be in a sewer - he looks delightfully unsettling.

It seems like Pennywise is put together wrong. Instead of pointing straight ahead, like most of the figures, his head is tipped forward, so you can't really appreciate the details. But think about it: he mainly spends his time threatening children, so of course he'd be looking down! They're shorter than him! Picture him standing next to Sam or Chucky, and it all makes sense. I really really wish I'd gotten the glowing one, but even the normal version is worthy.