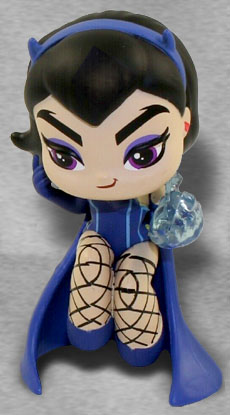 Raven's origin in Bombshells only got a slight tweak: instead of her father, Trigon, being a demon from another dimension, he was a mystical mountain spirit right here in Germany. Hey, they've got forests and mountains aplenty for stuff like that. After that, though, things start to get different: her village was wiped out by another magic user who wanted to turn young Rachel Roth into her apprentice, then put the girl into a magical slumber to be brought out as a weapon when later needed.

As a Mystery Mini, Raven looks 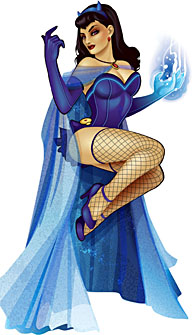 very much like her Bombshells statue: she's hovering off the ground (her cape holding her up as he knees are tucked together in front of her) and her left hand is surrounded by blue energy. Here eyebrows are hooked, and the way her bangs come down over her forehead do a lovely job of suggesting the shape of her mainstream counterpart's hood, and she wears a tiny pair of devil horns on a headband. The light blue piping on her bodice is painted cleanly, though the fishnets do have a hard time lining up - it's like an old-school NECA Predator up in here!

Raven was one of three "Specialty" Series exclusives (meaning places like comicshops, rather than Hot Topic or Gamestop), and while they didn't have a specific case layout, all three were available in a 1:12 ratio, so you were guaranteed to get them if you bought the full set.