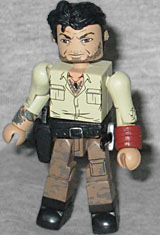 of Vibranium, a metal with unique properties that is only found in the African nation of Wakanda.

Klaue (Klaw) was not part of the original Avengers 2: Ghosts of Georgia script - the action would have taken place in Wakanda, but without any Black Panther characters, which seems kind of pointless. So eventually they moved it to Mauritania and decided to use Klaw (Klaue) as the tie-in. He's played by flesh-and-blood Andy Serkis, which was a choice inspired by a fan-cast that came up while Joss was looking for images of the character! Awesome! The likeness on the Minimate is very good, and the paint is intricate: he has camo pants, wrinkles on his shirt, and highly detailed tattoos - including a giant scorpion on his right arm and hand. He's armed with a pistol and a large knife, and although both fit into his belt, the gun is very loose in there. 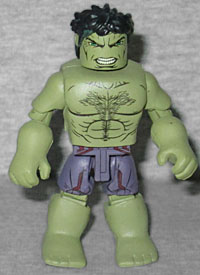 His body infused with gamma radiation, Bruce Banner has learned to harness his transformations into the powerful brute known as The Hulk.

I'm actually skipping a lot of the 22 Avenge Street Minimates, because they're so similar to things we've already got. I have enough Thors and Iron Men, you know? But my previous movie Hulk was messed up, so I was glad to get a new one. He's greener than Rampaging Hulk, but is still wearing his stretchy-pants. All the same add-on pieces, really. And like Mark Ruffalo, Hulk has a hairy chest.

I didn't really care much about Vision or the Hydra agents, so I was really glad to see that the other two sets from Series 63 were available at Toys Я Us. I mean, did you ever in your life expect to get a toy of pre-Klaw Klaw?