The second MotU Minis release really showed that Mattel was really counting on this line having legs. Round One, you've got He-Man and Mer-Man, which 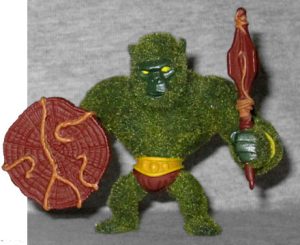 makes sense, but then in Round 2 they dive right into Moss Man? That's pretty far into the catalog for a second release. It's not like he's a Filmation-only character, but he's not part of the main cast, either.

We can't really see much of Moss Man's sculpt, because even at this small size (just over 2" tall), Mattel went for the flocked fuzz. Classic! The only bits not covered up are his ears, 2K2-inspired face, his fingers, the soles of his feet, and then his wristbands and belt/underwear. Thankfully, they didn't make him smell this time. His accessories include a superdeformed version of his usual club, and a new wooden shield that really just looks like a cross-section of a tree.

Moss Man may be a charity case, but he's paired with the biggest bad of them all, Skeletor. There was already a plain Skeletor as an SDCC exclusive, 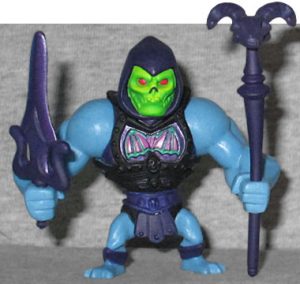 so this one is wearing his Battle Armor. It's detailed very nicely despite the toy's stature, with itsy bitsy bolts or rivets or whatever. Strips of metal run down his back, and unlike the big figure, he gets the leather skirt instead of the fur underwear.

The paint on the armor is a mix of flat purple, metallic purple, and black, with bright green and pink for the batwing design on the chest. His skin is blue, obviously, but the skull face is more green than yellow. It's sculpted with a distinct underbite for some odd reason, but it looks appropriately cute for the style. He's armed with his version of the power sword, in tones that match the armor, and an adorable little version of the Havoc Staff complete with ram skull on top!

Buy all six MotU Minis sets, and you'll be able to build your own miniaturized Castle Grayskull - and honestly, that was a smart move on Matty's part, because there was no way these would have sold even as well as they did (ie, they're still all available for purchase with no waiting two years later) without the added benefit of a Build-A-Figure. Set #2 includes the base of one of the castle's towers, complete with the brown rocks it's built into.

These are nice figures, but what we said in the first review is still true: they're good at clearance prices, but no good at all for what Mattel tried to charge for them.